“So, uh, okay, wow. The opening band was called ‘Valient Thorr,’ but they spelled ‘valiant’ with an ‘e,’ and ‘Thor’ with two rs.”
“Okay,” Zach replied. He was clearly not impressed so far.
“So they had these huge Hurra Torpedo-style beards and were playing like Southern rock crossed with METAL and shit. That was pretty good. Not quite amazing, maybe, except for the guitar player climbing up the PA stack, but, you know, that’s been done. Oh yeah, the singer came down off of the stage with his mike — still singing and doing some crazy spoken word shit while the guitarist was shredding or whatnot, and he went up the stairs.”
“The stairs?” asked Zach.
“You know, by the bathroom.”
“That must have been a long microphone cable,” Zach stated, crossing his arms. I could tell that his interest was piqued, but not fully engaged.
“It was, but listen: as he was singing, he climbed to the top of the railing and starting to motion to people that they should come over so he could stage dive–”
“No…” Zach commented.
“– off of the landing! The landing!” I shouted gleefully. “Everyone kind of took like ten steps back.”
Zach laughed. I laughed. Kamran probably laughed. When his design takes over SUA, I will petition the elder lords of Team Kickass to see if he can gain admittance. We will then put it to a vote, and if he passes the vote and subsequent hazing (followed by another, more secret vote), I will start to notice when he is actually in the office. I mean, he’s like a ninja, but I’ll set up a motion detector or something, so I see him before 5pm when I turn around to say good bye.
“Then, when he got back on stage he was all ‘that’s not cool, man, you fuckers were gonna let me die up there. Die!” 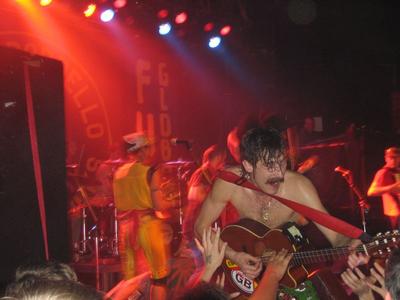 I went on to tell Zach about standing inches from the bass bin right up next to the stage and freaking out and sweating while pogoing and screaming all the Gogol Bordello lyrics that I could remember. I left out the bass player’s big dicked swagger and the continuous and frantic on-stage action. I left out the way the crowd was half punk kids, half in russian garb, and half an explosion of girls with blue hair and black xes on their hands. It was like Suicide Girls exploded out of my pants and all over First Avenue.

I had jumped and screamed until my legs burned and my throat was torn to shreds. In the encore, or before the encore — or somewhere in the blur of crazed Romany music amplified and played faster and faster — one of the girls onstage let her bass drum do a little crowd surfing. She had a marching band bass drum strapped to her, but unstrapped it and set it onto a forest of upraised hands. Then — and this is the part that catches my breath and flushes my face like I just shot a dozen loads wildly onto the curtains and walls and ceiling: she flipped onto the bass drum. There she was, with her mallet between her teeth, straddling that drum while it surged back and forth on the hands of fans who hopefully shit their pants in wonder. As if that weren’t enough, she kneeled on the drum and pulled that mallet out from between her teeth so she could play the drum while riding the crowd. 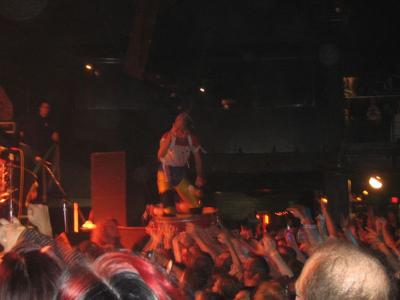 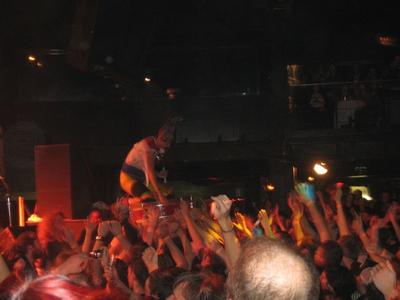 It was at this point that I was glad to have my nitroglycerin tablets. I shovelled a handful into my mouth and cursed my bum ticker for almost seizing up while the band hammered out steady rhythms. My head exploded. I swore like a longshoreman, then a sailor, then invented new swearing, then learned the ancient unspeakable tongues of the elder gods to open a gate to a forgotten and mouldering city full of cyclopean architecture so Cthulu could come forth and swear on my behalf with inhuman tongues* (possibly for waking Him up early).

Zach did not believe this part of the story, but when I defended its veracity, he one upped me by bringing up a show by the band Darkness, where the singer crowd surfed while playing his guitar and singing through some sort of wireless chicanery. I do not doubt his story, but that is his to tell, and I refuse to unleash any sort of evil to swear on his behalf. If Zach wants to borrow my Necronomicon, he can. After all, I borrowed Lost season two on the Keathly’s behalf like a decade or two ago, and now I’m not sure where the discs are. So, yeah, maybe he can just have the Necronomicon.

*Ladies, Cthulu probably has more than one tongue. Think on that. I am.

Photos by Papa Was A Rodeo — Used Without Permission