There’s a Light at the End of the Tunnel

Class is in session. I’m doing everything that I can to stay calm, but something about work and school runs me down. Also I think that I had a virus or some other thing from Seattle until last weekend. All of a sudden I just felt better — so much so that I haven’t been able to sleep. 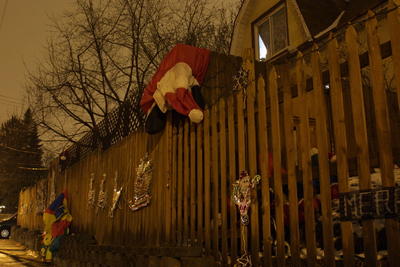 I impress even myself.

Also, I finished the german moonshine.

I bet it all on red and lost.

Written on Tuesday, the 1st of November, 2005 at 11:30 am and was filed under: Wallowing, Diversions, Nerdity

There’s something wrong with my server or someone is attacking it in the wee hours. I’m terribly sorry about the service interruptions. Maybe if I switched to Windows it would be more stable! HA ha! HA! Sigh. My server has fsck’ed itself three times since Sunday. Even my server is getting more action than me!

Okay, really I’m just jealous that Melissa is dating again and has found someone “very sweet and nice.” I’m not so much jealous of someone kissing her as much as I want to be the one kissing boys. GIRLS! I want to kiss GIRLS! I’m glad that she seems happy, she deserves the best.

Paul walks down the street and women fly out of their houses towards him. He sits in class and panties fly across the room to stick to him. I think it’s the hat. He has a magnet in it. I should get a magnet. And a hat.

I shouldn’t write anything before my brain comes online. Sorry about that.

The other day Melody asked me over AIM (yahoo? I dunno which instant messaging protocol, it doesn’t matter, I say AIM like Kleenex now) if I was okay. She said that I seemed down.

Okay, now, after the lot of you stop laughing because she had to ask if I was down, here’s the weird part: I wasn’t. I was busy working or looking on ebay for stuff that I don’t bid on because I don’t need it but isn’t it nice to know that I could buy a ceramic monkey statue if I wanted one and whew I just killed an hour without making my brain do any heavy lifting. So, what is important about someone asking me if I’m okay? I dunno, she’s one of the few people to have asked it right. When I am actually feeling like crap (which, believe it or not, happens) I always want someone to ask in the pointed, tenacious way that she did. Good luck trying to get that exact phrasing and attitude correct. The wrong approach will likely just annoy the shit out of me.

I’ve been happy with the whole school thing this semester. My classes are filling the usual pattern:

I’ve even been enjoying the torment of exercise in bicycle form. My Surly is comfortable and fast. I can pick it up with one hand without even a grunt. It hurts like hell to ride up Johnson and my ass hurts when I get on the bike in the morning.

Goddamnit, I like my boss’s blog better than mine: The domain of Xopl. This should not come to a surprise to those persons who regularly visit my junk drawer of a web site. I could have gone for booze with him tonight, but I don’t want to worry about not being able to catch a bus back from the useful parts of Minneapolis at bar close.

I wonder if anyone is home. I need a drink. Maybe I should bike to Grumpys.

Before I dated Melissa I was single for four years. Here’s to four more!