Sarah has been working on her proposal for a residency at the Minnesota Center for Book Arts. It would enable her to produce several editions of her book of rocks while teaching and learning from the kids and staff over there. That’s big time stuff. Although I have a general talent for lining up words one after another, there isn’t much call for pop culture references and flights of alcoholic fantasy in your garden variety artist’s statement*, so Sarah had to call in the big guns: Chandler, whose casually brilliant artistry consistently smashes me in the face. Sarah arranged for us to spend the evening with Chandler and her beau, Donald.

I’ve been dragging my feet on posting about Donald’s home because it deserves careful, close attention. From the outside it could have been any post-war bungalow in South Minneapolis, but inside I blinked and found myself dragged sixty years backward in time. An idly spinning record played men singing folk ballads. The sound had the unmistakable warmth and warble of vinyl that was played regularly. An upright piano nearly blocked the door, its top bristling with pictures in neat frames. To my left were threadbare chairs in peculiar shades of salmon and graying green. Bookshelves held up the walls on two sides, ballasted by a whole row of Dickens novels. He had pulled furniture straight out of the faded slides I dug out of my grandparent’s closet. I halfway expected to look under the couch and find a tin of ancient Tinkertoys with an uncle’s name on them in crayon: just one token toy for my great grandmother to have on hand when squirmy children swam into focus on Sunday afternoons. 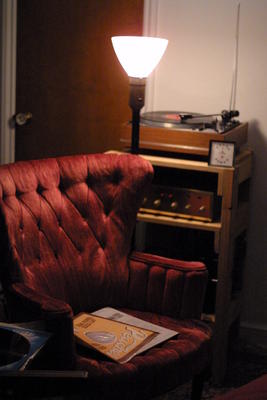 Donald had greeted us at the door and apologized for running a little behind. His garishly purple shirt was framed by brown suspenders holding up pants I imagined my great grandfather wearing in a grainy photograph from his youth — except that my grandfather would have had a grim expression on his face. There was nothing grim about Donald. He glided from the entry to kitchen, calling for us to make ourselves at home while he finished making mincemeat pie.

I unbundled myself from my ratty Carhardt and set my reinforced polyester messenger bag next to Donald’s canvas backpack. The foot wide white plastic reflective area glared next the dark green of his world war two surplus. I winced and fished out my digital camera, almost ashamed at my own modernity. Time was reinforced by the half dozen clocks visible from the entryway, all ticking in robotic syncopation. 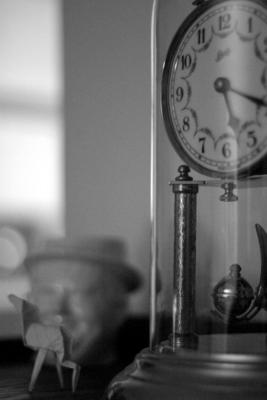 The first time I had been to the house I had brought only my film body, which severely restricted the number of photographs I could take. This time I would be open to shooting as much as I liked without worrying about cost or chemicals. While we waited for Chandler to arrive I warmed up with a few practice shots and made small talk with Donald in the kitchen.

There is not a lot of counter space for Donald to cook. His large table was covered in trays and dishes, but didn’t seem as much a mess of dirty dishes as the remains of a great cooking adventure. I marveled at his cookware, which included four cast iron pans and a host of simple saucepans, none seeming corroded or scorched. Like the clocks, they all required simple but regular maintenance of the sort that would have been outlined in the sort of yellowed pamphlets that I used to find tucked between musty encyclopedias in my grandparents basement. 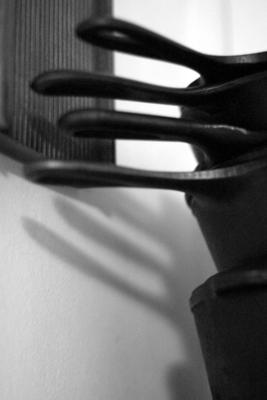 I lost Sarah when Chandler arrived. First Sarah presented our hosts with prints from photographing the grain elevators one or two months ago. Then she and Chandler set to discussing Chandler’s current project. They practically leaned their foreheads together while hunching over a notebook sketching different ways for flaps to close together. I was a bit lost so I documented knick knacks and confessed again my covetousness of Donald’s pantry. It was mostly full of food preserved in glass jars — from preserves to beans. The beans reminded me of Kory’s house, where I had filled shelves with dried beans in jars before fleeing for emotional triage at the Keathlys. The tiny, dark room itself gave me pangs for the black plastic shelves that I had put up in the closet of the apartment in Anoka — pangs from the very last weekend where I had made one last grocery shopping trip as part of an elaborate peace offering before suddenly packing everything up and running back to the Keathlys with my tail between my legs. Pantries are loaded with meaning. 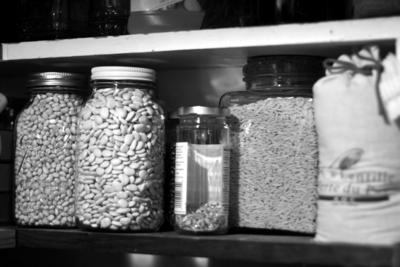 I never quite know what to say around these new friends. I asked a bit about the food and snapped pictures of things that caught my eye. I dropped to the couch next to Sarah and jumped up to try to think of meaningful questions to ask Donald about the food. I think that I made some small talk about school, but felt like I was coming across either as uninteresting or arrogant. As an undergrad seeking my Bachelor’s of Arts (which, honestly, isn’t even a real degree, come on) standing in a room with people pursuing doctorates and artists pursuing residencies makes me feel underqualified.

Tea was served, and I finally had a role to play — the hungry guest. Schooled by years of being Courteous, Appreciative, Helpful, and Polite (C.H.A.P.) to grandparents had left me uniquely qualified to say “please” and “thank you” while having food thrust upon me. I’m sure that I exerted a certain magnetic or gravitational pull on the various niceties served while we waited for the mincemeat pie. Donald shuttled baked goods from the kitchen, still wearing his well used but neat apron. 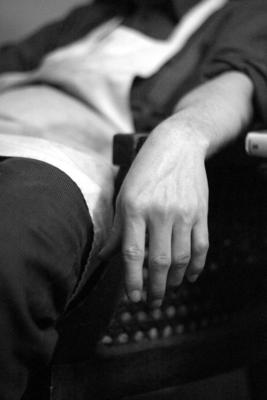 When Donald got tired of waiting for the girls to finish discussing Sarah’s proposal, he pulled out his concertina. His dynamic range tilted more and more to the loud end with each dirty look Chandler shot him. I grinned and wished that I knew any of the words to sing along, and the melodies too. The last visit had included Christmas Carols — a fate normally akin to being flayed, but that time it had been fun in a “I’m going to go drink that bottle of brandy and show you that I can fit into your tub if I just curl up in to the fetal position” kind of way. Not that I’m scared of singing at all. 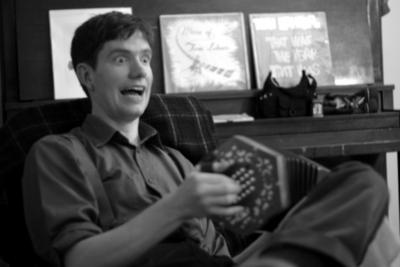 If you’re especially lucky I might write part two of this.

* This is also why my series of pirate versus ninja oil paintings will remain eternally and tragically unfunded — despite their careful and elaborate message regarding the eternal youth of the imagination and the wholesale escape of our generation from the tremendous pressures that our elders are either ignoring or dumping on us while they fritter away their lives playing golf and espousing christian values that seem to begin and end with hate, fear, and greed.