I rescued my car from icy slumber this evening to transport me to my mother’s house to watch Lost in HD on her big assed television. I shall not covet. While my daily commute has been bus powered since the first real cold snap, I enjoy the once-a-week spin across the river — partly because I get to blast breakbeats from the local hip-hop group Big Quarters. I bought their “instrumental” CD at the Heiruspecs show at work because Medium Zach was standing around with a box of them. Really, I bought their regular release Cost of Living and got Zip Disks Break for free. The stereo in my car has never sounded so good. Who knew?

Anyway, back to the beer. One of the side benefits of showing up at my mom’s house is that unclaimed beer tends to get funneled into my hands. Last week I picked up a case of Winter Ale. This week, I walked in to find John making me chicken sammiches (organic, even!), but before he let me top them with broccoli sprouts and a smear of Famous Dave’s Devil’s Spit (not as hot as you’d think), he led to me to their unheated front porch.

There, stacked one on top of another, were two twelve packs of beer. What kind of beer? If the devil spits barbecue sauce, it’s because he can’t handle this beer — which was originally brewed by monks at the end of long winters to stay their urges to stab each other.

“IF THOU SQUEAKETH THINE PEW BUT ONCE MORE, BROTHER FREMELHEINER, THOU WILLST SURELY PERISH BY MY HAND!”

Instead, as cabin fever rent the monks’ nerves, they steeled their resolves with the promise of the holy nectar of angels, milked from the supple breasts of seraphim: Maibock, the May bock.

May is a long time to wait for relief. Sarah and I have been staring at each other silently for hours at a time.

“I can hear your mustache growing,” she says. She never pronounces the “o” in “moustache,” which makes the whole thing feel so sordid.

Two twelve packs of Maibock — practically a case, except that the boxes were different sizes. The counts of bottles were the same, but Summit had reached a new level of social irresponsibly: one twelve pack housed twenty-two ounce bombers.

Lost was excellent and Call of Duty 4 was snipertaculous, but the whole evening I had the Maibock stuck in the back of my mind.

When I returned home, I examined my ill-gotten booty. 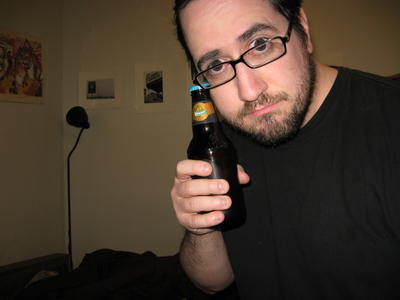 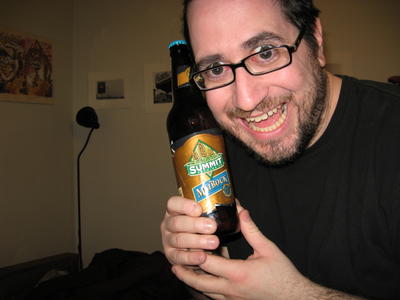 John, thank you for your kind gift of beer. At the moment, I cannot possibly accept any more. I had to take the vodka out of the toilet tank to make room for the beer. When I am in danger of being able to put food in or near my fridge again, I will duly request more beer. In other news, this is a good problem to have.

All right, I’m gonna go sleep in my beer fort… because I have so much that I can make a fort out of beer as if it were sofa cushions.

4 Responses to “Hooray for presents! ”