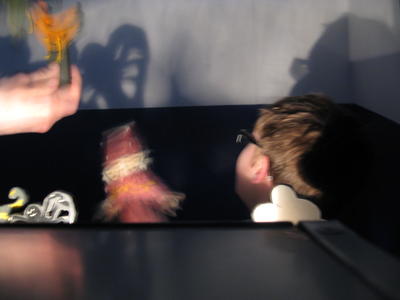 Admittedly, the water room was pretty cool. It had bubbles and boats and pipes and things like that, which is why I was too busy to take pictures of Noah playing and possibly learning. It just seemed like most of their displays were too small and not interactive enough. In three hours I don’t feel like we missed anything. I wanted more buttons to push. The button-to-Jesse ratio was so far tilted to the “Jesse” side that there were barely any buttons left for children of ordinary ages.

Noah did enjoy the play town with lots of louse-filled costumes. He got to drive a city bus! 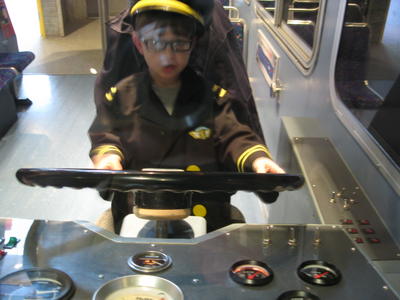 Noah got to be on the Sesame Street steps! Unfortunately, you can’t go in that door. Noah tried anyway, over and over. Maybe he thought that it would get him out of the museum so he could do something not half-assed, like “playing in the snow.” You could be on tv with the Count, or Elmo, or some other puppet, but the chroma key was from 1982. There was a sign that said that parents could put in a videotape to record their child on television. I didn’t photograph it because I was too busy enjoying my childhood frozen in time. Dear Children’s Television Workshop: please use better saran wrap — it appears that my childhood is getting freezer burnt. Maybe I’m being too hard on CTW. After all, they had a sign that said that they “could not and should not continue without selling out to the man.” [emphasis mine]

I kid! They just said something about having to commercialize to make it on the mean streets of PBS. 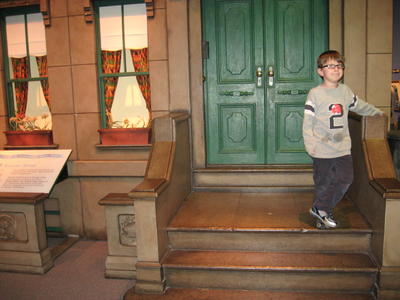 Next time, maybe we will take Noah to the real Science Museum, which I remember as being at least fun for me.