The [we] is a couple of guys who were snickering every week. I accepted their mission.

As long as it won’t get me fired or arrested, I’m down with doing an illustration — especially if it will *almost* get me fired AND arrested.

Negotiations ended in this request:

> The Photo Request goes as follows:

Those two, signing a contract, in which Satan himself promises Fun Bobby that the U will become one of the top three research facilities in the WORLD.

Oh yeah, I can sure do that. Oh, wait, there’s some art direction:

Quotes not mine. Here’s the output, remarkable for being completely dick-free — if you don’t count Bob himself. 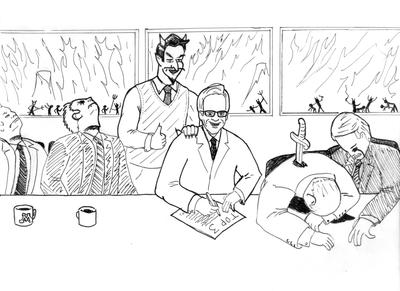 Everyone was excited, and then I received this:

So after okaying it with my boss and everyone laying out the paper, the
tops of the top have decided…

Sure, the Daily won’t publish it, but I will, because this is my personal site. I make the rules, and the rules say that you should leave more comments.

3 Responses to “Ups and Downs of Doodling ”