Iconpacks for Gallery
The administration of Gallery seems to require an endless supply of tiny icons. I wrote new code to check all the available modules for things that require icons. I fixed the code that checks the css files for defined icons. That stuff won’t get checked in until after the next release (I don’t intend to finish it until then, anyhow), but I needed better tools to perform the assigned task. The last two icon sets will require either new icons from their creators or me just giving up and assigning them placeholders. I give it to tomorrow to hear back, and then I stride forward boldly.
No E_STRICT errors in Gallery2 under PHP5
I was told or it was at least implied that I shouldn’t work on this, but to date I have only been given onerous tasks with regards to Gallery. I enjoy futzing with this stuff.
PHP, easy as APC
The current front end for this opcode cache looks more like C than PHP5. I started by making it validate, then started to lint the PHP, then just gave up and started tearing the code into thin strips and gluing it back together in the shape of a horse. The next thing I knew, I was futzing with the C in the extension (which, honestly, is the happiest I’ve been programming since forever) to see if I could find what was causing errors when the cache was getting full after running for a while. I don’t know that I found the errors, but I found other things, and maybe things that I will bow and scrape and submit to the actual developers.

I predict one of two results:

Get off your knees, son, for no person is a king here, we are all equals! I approve of your code and shall champion its cleverness across these great Nets of Inter, for the time of your code is upon us and we shall all cry your name in wonder!

Aren’t you the guy who was loud and drunk at the Microsoft thing last fall? No one thinks you’re funny, and your code doesn’t compile.

Maybe somewhere in the middle.

1, 2, 3, Baby, You and Me!
Sarah is forcing* me to go to Brainerd to be at or on Pequot Lake with her family. I’m gonna put on my blue eye shadow and head out!
Gallery Code Reviews
I’m pretty sure that I did the most reviews in the month of May, and possibly April. I think that I ran out of reviews to perform in June.
Oh the Huge Manatee!
Fancy seeing what it’s like to pilot one of those gentle giants? Try it online! The narration is… the best part. There’s also bowling. As long as your eyes are crossing up with incomprehension and horror, you might as well listen to the hot summer jam “Pleasurefist, penned in response to a tweet by the glorious rstevens. What? When you make a better Pleasurefist song you can point fingers. Perhaps you’d be more comfortable with the family-friendly Handy Andy World 2 game that we made at work. I did pretty much all of the sound effects this time — a feat which has been described as “delightful and creepy,” and had the side effect of yielding a new description for me: “delightfully creepy,” which is possibly better than just being called “creepy,” but really, is not, and I would prefer to stamp that out directly, but I’m holding on to the cold stares for an emergency.
Fixing images in this blog
There was an… incident… in the database for my gallery. Some things got… moved. Rest assured that I am working tirelessly to identify all wayward images.
Gettin’ some new business cards
Take a look at this business: 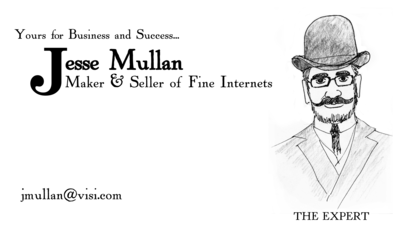 Now imagine it way more awesome AND in physical form. Chandler has agreed to help me negotiate a steel mankiller of a printing press to crush my image into a set of business cards. As if that weren’t enough, she agreed to redraw the portrait such that it won’t look like the painful scratches of a drowning two year old. Her words! Oh. No, my words.

Additional Gallery2 Integrity checking
I think that my original project, meant to be implemented outside of the Gallery code base so as not to fall down if something were deeply wrong with a person’s Gallery installation, is being sucked in — perhaps to its eventual detriment. Nonetheless, I persevere and even have an early version of the code in the Gallery code review system, so it is less likely to be completely forgotten about.
I saw my older sister
I can’t remember for sure the last time we saw each other — possibly two years ago. It was almost as weird as a couple of weeks ago when my grandfather said that he didn’t recognize me, even after being reintroduced, but for totally different reasons.
Some other stuff
I can’t remember, and I might actually be getting tired, which would be nice. If I toss and turn again, I might read some more of Catch-22. Why didn’t anyone tell me that it was this good?

Fun fact: some people can’t say schmutz! I guess that I assumed it to be a term of wider use. Maybe it hasn’t been assimilated and still needs to be italicized as a foreign word: schmutz. Oh, I’ve been meaning to tell you, you’ve got some schmutz on your shirt.

*no waterboarding was involved