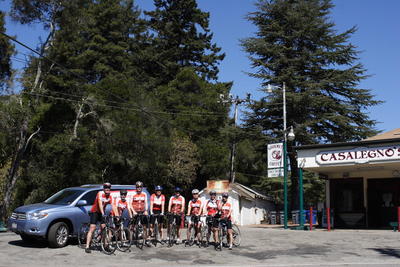 The weather was, as is its nature here in California, clear and sunny. I arrived, as is my nature in the mornings, a bit late, and jumped immediately on to my bike to head down the gravel trail running parallel to Highway 17 and a creek of dubious creekiness. I crunched my way past joggers and the occasional ambling cyclist until reaching what appeared to be a chalky cliff face. My slick street tires spun — not even throwing any rocks — so I hopped off and walked my bike up the hill. Local walkers kept my pace. I wondered if pushing my heavy bike meant that I had an out for letting them pass me, but instead I paced with them. My calves were roman candles firing into gas cans, but at the top I didn’t rest with the walkers — I hopped back on my bike and rolled onto the next road.

The next road was laced into the hillside rising up from a mostly dry reservoir. It climbed, fell, and swerved left and right. I biked in near silence. A lone deer leaped across my path. I climbed and coasted, climbed and coasted in endless succession. I began to think that I had simply looped and was recovering old ground when suddenly I came upon our SAG vehicle. That’s an acronym, possibly for “Support and Gear.”

I had nearly finished my first bottle of water, so I picked up a new one and started up the next road, which was uphill. When I say uphill, I mean “upmountain,” for it started out a bit tough, escalated to steep, and the fell back to brutal. I put my bike into its very lowest gear and pumped my legs. My breath grew ragged, and I couldn’t breathe through my nose any more. I stared at the road just ahead and swerved a bit left and right.

“You’ve,” I said amid gasps and groans.

“To!” I shouted, putting a little mustard on it in a vain attempt to recapture something like a cadence.

“Be…” I wheezed. Each word had grown to a sentence in its own right.

“Kidding,” I muttered, falling silent except for the pounding of my heart. I closed my eyes and saw a flashing light dancing in the front of my vision. It remained when my eyes reopened.

“Me,” I said, leaning over to rest a foot on the ground. I caught my breath and resolved to try to find a maintainable pace. My legs didn’t even feel tired. The flashing had stopped and I could control my breath again, so I hopped on. My feet make slow and cautious circles. The road steepened. I forgot to breathe in through my nose, and barked out each breath.

“This isn’t right,” I thought to myself. I saw a tree-shaded pull off ahead. My feet were already on the ground again to walk my bike, and I figured that since I was somehow already walking, I could push my bike the next fifty feet to that patch of shade and stop for a bit. Somewhere behind me I heard a group shouting, and knew that the last group was coming. How far back were they? I would likely catch my breath before they arrived.

I sat on the top tube of my bike and balanced. Wind howled in and out of my mouth. I was a clay golem staring into an unkind sun. The cyclists were coming. I waved weakly.

The train slipped around the next corner. I blinked and suddenly felt nauseous. Then my stomach emptied itself. Then again. Then a third time, and once more until I feared that only powdery dryness would emerge. It occurred to me that entertaining notions of getting back onto my bike were likely to be extremely foolhardy. I could breathe again, but who knew how many feet it would be before my body simply pulled the plug and blacked me out? I called Susie in the SAG vehicle, who swooped in, gave me yet more water, let me put my bike into the car, and drove me up the mountain. We paused to give Andy more water, then chatted our way past the team, up over the summit and down to a likely stopping place. Eventually, the riders caught up again, so we got out for even more water and a photo op. I was a bit shaky and my lungs felt more more sandpapery with every cough, but photographing pulled me up on my feet.

The next time we passed the group, I hung out of the car window just long enough to scare Susie. 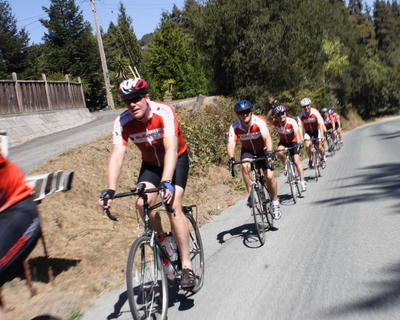 The other end of the route was

I brought flip flops, swim trunks, and a comfortable, easy to remove shirt to the beach. I stowed my bike and immediately put my feet in the water. Cold. 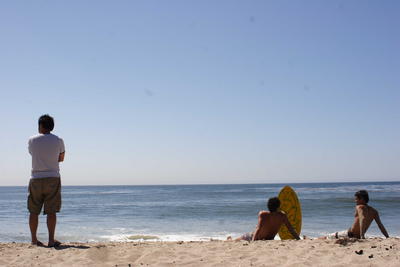 I was chatting with two coworkers just out of reach of the waves when I realized that I was simply ready.

“Would you hold my glasses,” I asked quickly, “and watch to make sure that I don’t drown?” I grinned at their affirmative response, even though they looked a little uncomfortable at the prospect.

“On second thought, if the sea takes me, let it have me,” I said, shocked that for once I actually felt like I might mind spending time in Davy Jones’s locker.

“You should just walk down and dive into the next big wave,” said one of my coworkers. I wasn’t sure when to go.

“That one!” he shouted, and I ran for it. I was vaguely aware of boogie boarders nearby in whose way I may or may not have been getting, but then a wave was upon me — a wave bearing pirate ships and kraken, viking longboats and sperm whales, sharks and dolphins, fair maidens and mermaids, and innumerable fish of every stripe. I flew under the wave’s power and under its surface: cold. green. salt. Sand tickled my toes and fingers. I stood and shook like a dog.

“That’s fantastic!” I shouted to no one in particular. Another wave swept over me. I fell into and under it, then scrambled up the beach to towel off and gush exuberantly.

“Oh my god, that was wonderful!” I’m fairly sure that I had a ridiculous and toothy grin on my face worthy of any 6 year old.

“I’ll leave that experience to you,” was a nonplussed reply. 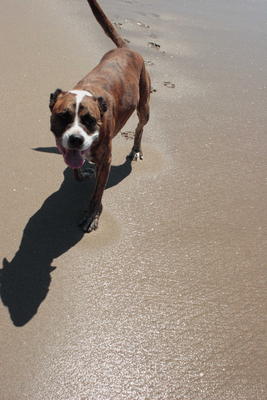 We ate various grilled items and drank beer from kegs buried in the sand. Fog rolled in over the volleyball game, and the bus came to pick up everyone who didn’t already have a ride. I went for one more dip, but the waves picked up and were a bit too daunting. 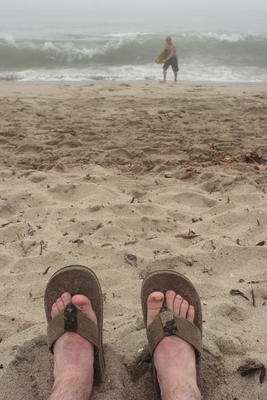 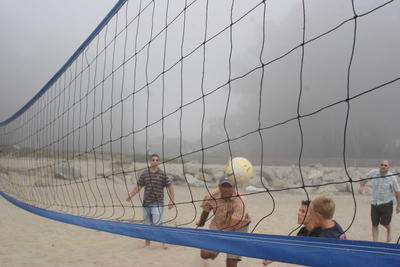 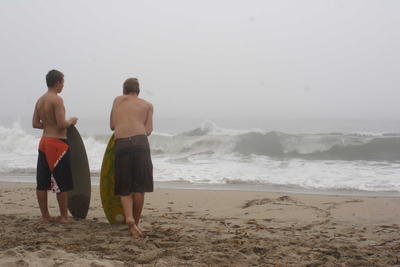