Then they arrived, I opened to door to find Mary Ann holding out a fuzzy black squirming animal.

“We brought you a pet!” she squealed, and I immediately flashed back to my friend Lisa doing the same thing in the mid nineties.

[Imagine the next paragraph as a flashback. If it helps, make the woo woo sounds and wave your hands]

“I brought you a pet!” Lisa had squealed, and deposited Jake, the black cat who attacked the feet of the neighbor-whom-we-didn’t-like-all-that-much-but-tolerated-because-the-other-neighbors-seemed-to-like-him-just-fine. I loved Jake. He was a good cat for me, except that he and the other cat that Lisa dropped off unannounced were really too much pet for me, so they tried living with two different sets of friends before coming back to me and having to get taken to the Humane Society. They cried; I cried; it was terrible. Then, Jake was for sale at the PetSmart and Lisa begged me to go visit, so I did, and there was my cat right there meowing at me with those big sad (but yellow) eyes, and forgive me for having shed a few tears again because I loved my pets but I knew that I wasn’t the best keeper.

[okay, the flash back is over, please resume marveling at my retelling of events recently past]

A strangled “what?” squeezed itself out of my mouth. I turned on the hall light. I saw a beak. Mary Ann raised up her hands to show me clawed black feet.

“It’s a crow!” she said, grinning. “We found it on the path,” she continued. I blinked, dumbfounded. I fully understand other people’s desires to rescue things, but I would much rather leave wildlife to the experts, like game wardens and butlers.

“Uh,” I said, gesturing vaguely to the strangely immobile bird.

“It was really squawking before,” she continued. “It’s really quieted down since we picked it up. Can we put it on your patio while we go to dinner? If it’s still alive I’ll take it to work with me.”

I couldn’t argue with her rationale, so the patio door was opened, and the bird was placed in the corner, where it made a few more plaintive cacaws and flapped a wing.

We had a fine dinner at the Taqueria. Don pretended not to be able to pronounce taqueria, instead saying things like “tauroroonie” or “colusseum.” Pleasantly full, we returned, and the bird was dead, or maybe just resting.

Mary Ann did not agree with my assessment that we had to don hazmat suits and call the CDC, saying that the crow was not likely to have died from bird SARS flu. What if it had bird AIDS? Bird ebola? 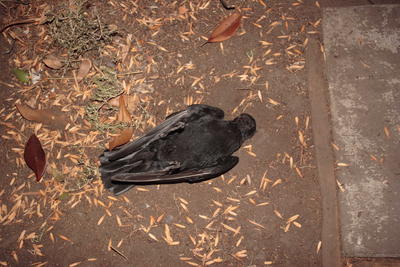