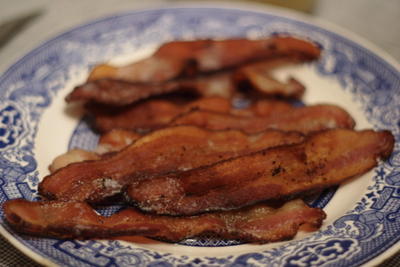 Once in the kitchen, unshowered, but with obsessively washed hands, I tended to the bacon for what seemed like endless days of frying. It sizzled mockingly in a half inch of its own rendered fat. Donald likes it when the bacon deep fries itself.

After breakfast, we said goodbye the the other Thanksgiving guests, Donald called the landlord about the newly broken shower, Chandler paid some bills, and I received an email mentioning that my grandfather was in intensive care.

I will admit that I was having a little trouble processing the news, and that trouble was further impeding me from figuring out how to get a hold of my family in Wisconsin. I would like to say that my phone calls were clear and direct, but in reality, I stammered my way through them. It’s a good thing that I have an older sister. Ellen is an RN, and possesses the calmness of skilled medical staff. She interpreted the email for me and let me know the severity: my grandfather is recovering from a major but well understood surgery.

I don’t know if she could hear me tearing up on the phone. I was relieved, but suddenly I was overwhelmed by how much I missed her. We haven’t been in touch very well, but before I moved this summer we made a hasty peace in a few sentences. One of my nieces had answered the phone and I had mistakenly thought she was her mother.

“Jesus Christ, you sound just like your mom,” I said. Her name wasn’t Jesus or Christ, but the words had run out of my mouth on their own. She had spoken, and I immediately saw my sister at sixteen, surly and cool like any sixteen year old, but big eyed and with wrinkled forehead as she recounted some hilarious scene from a movie.

Ellen recounted all of her daughter’s athletic successes. Haley had been setting state records in track, and as the seasons progressed, she moved into volleyball and cheerleading. Of course my niece is fantastic at all of these things. Every sport pulled at me to come visit and cheer — to see her winning and smiling.

I got another phone number to try, and did, which led me to another, and I got a hold of my cousin Derick, who had been at the hospital and set the story straight. Ellen’s interpretation had been pretty on the ball, and I was further relieved. I still hadn’t gotten a hold of my Grandmother, but my number was on her answering machine and in Derick’s hand.

Donald and Chandler took me to downtown Seattle to see Pike Place Market and have dinner. We ran into crowds and traffic for the tree lighting. Our crawling pace in the car felt like being stuck in a research sub. Lampreys and moray eels swam past the windows carrying bags of holiday gifts. Seattle was a bit crowded even when we were on foot — crowded and scenic. Las Vegas has more neon — heck, Reno has more neon — but the sparsity of Seattle’s neon is made up for with class. Vintage and retro neon didn’t fight for space, they shared it in an orderly but unplanned fashion.

Portland felt more like home. Portland is a bit like Minneapolis, but more complete and metropolitan — as far as I could tell from a handful of hours in its downtown. The West Coast in general makes Minneapolis feel a little strange. I don’t miss the place, but I miss the people.

On Thanksgiving, Lisa, Stan, and Noah were at my mother’s house. They brought Sarah’s webcam and called me. I saw them, my mother, John, Jeremy, Vince, Lucille, Ann, Nick, and possibly others (Dwight?) who were crammed into the frame and laughing with raised glasses. My throat hurt from not crying. I had to call an end just to keep it together. Donald, Chandler, and their other guests were ready to play board games, so I plunged myself into activity to keep my mind off of wishing I were thousands of miles away.

We went to Seattle today and had a terrific dinner with foods whose names I stumble over. My grandmother called to tell me that my grandfather will be in the hospital for a week, but is recovering. Sarah called from North Dakota. Her absence is conspicuous and so painful that it discolors everything around me. Even standing on the pier, I could barely see the Puget Sound twinkle with reflections of the far shore.

In Tacoma, I found that not only had I left my laptop on, but both the Keathlys and my mother had tried to contact me. On one hand, they both have my new cell phone number and should have known to call me to make sure that I’m online, and on the other, each of the six red flags in the call history ached.

“We wanted you here because you’re family,” Donald and Chandler said. We were huddled in the kitchen and I had just made that Thanksgiving call. I had admitted to be verklempt, but even joking about the truth was a crack in my armor. They’re a little bit family, or I farted under the shared blanket while watching Goonies tonight for nothing, which is why they convinced me to stay one more day and drive straight back to California, foregoing the two day coastal drive about which I have been orating for a week.

Bacon was also a factor.