Tonight I went with some coworkers to a couple of bars in San Francisco: the Parkside and the Zeitgeist. On the way back, I was driven fast enough in an Audi to nearly wet myself, but we arrived back at my car in one piece, and I drove two sleeping coworkers back to Cupertino with six glasses of water in my bladder. These were the same coworkers who convinced me that a bacon pie — really a cheese pie with a bacon crust was a good idea. Okay, you got me, I love the absurd and this truly qualified. 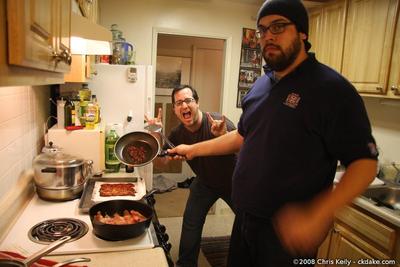 Anyway, them’s the shenanigans, such as they have been.

4 Responses to “California knows how to party ”