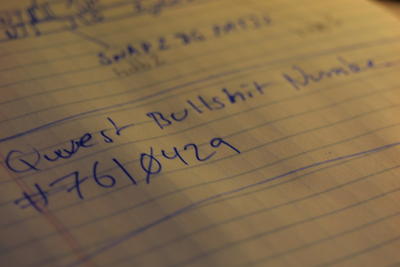 Qwest can seriously lick my balls. The DSL is out, and now it isn’t even raining. I called tech support, and a tech will be dispatched in the morning, but in the meantime, you might not be able to even read this post. I think that the person answering was having a hard time not laughing, because I have this routine down to a science, which gives me plenty of time to make snide comments like:

Then a manager came on the line and said that they were putting a manager escalation on the problem, and a tech would be sent out forthwith. Of course we didn’t hear anything until the tech left a note on our door: “please reschedule for when you will be in.” I imagined to myself that a “manager escalation” would imply some sort of special attention, like a phone call to say “hey, I was going through some old tickets and thought of you, maybe I should stop by just to say hi and catch up a little, if that’s okay. Do you still have the bottom to my blender? I don’t know how that got separated, but you know, hahaha, maybe I could send you money to ship it.” Or Qwest could send a card. Or an email. Anything. Please, Qwest, just drop me a line and tell me that you haven’t forgotten how nice it used to be, you know, when the DSL worked and people could get to my websites and I could get to theirs. All I want is a little closure, I mean, it’s not like I want “one last time” or anything. Well, not really. No, no, you’re sexy! Yeah! I mean, it’s just, well, no, haha, no, I’m not suggesting it. What? I know that you aren’t either, but maybe I should stop by anyway. Yeah. Around eight. Uh huh. Should I bring wine? Yeah, I still have a bottle. No, just to catch up and give you that blender part. Well, I don’t know, I mean, whatever happens… happens. I guess. We just, uh, look, okay, now this is getting weird. I don’t really want to think about it, I mean, we’re still, uh, shit. Fuck. Why is this so hard? I mean, we… Fuck. FUCK. I gotta go. No. I gotta go. That’s not fair! God! You always do this! FUCK! This isn’t my fault! Why are you always… no! It’s not me! God! I never said that! Never! NEVER! Fuck! Can’t I - no! Can’t I- I said no! Look, I just want my shit! Fuck! You’re always like this! I knew this was a bad idea. I knew it. No! Fuck you! I mean it! Fuck you! FUCK YOU!

Okay, that’s embellished a little, but the phone lady liked it, and there will theoretically be a tech here between ten and two, or whenever, because they just said “Tomorrow. Maybe.”

My guess is that the tech will be here exactly as my final starts. At least Lisa will be here, napping. Crap.

In other news, I finally broke down and let Lisa and Stan buy me an air conditioner. I think that it was when I had to swim across the backyard because the air was so soupy. That’s what sold me. Oh, no, it was all the stuff that I wanted to do tonight on the computer before I went to bed because I expected that the DSL would be working. Oh! It IS raining now. Apparently my DSL has the arthritis, and when that knee starts acting up you know it’s gonna rain.

Anyway, yes, I feel like a terrible person for selling out my principles and getting some climate control in my room, but I at least I am a terrible person who is not sweating. That has to count for something.

What was I going to write about before I had to spend an hour unplugging phones and calling tech support? Well, besides switching from build.sh to build.php for the nightly gallery builds, I was considering writing about:

Do you see all the things that you missed because my DSL is down? It’s time for the people to rise up and give Qwest the collective brown eye. If any of these subjects interest you, let me know and I’ll bust out with extra awesome detail.

3 Responses to “Fuck you gently ”