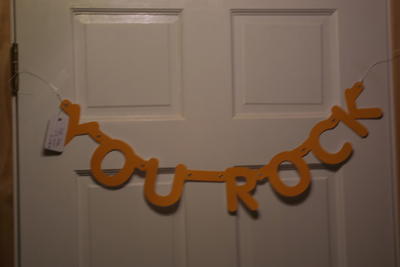 This was on my closet door after the zombie pub crawl. 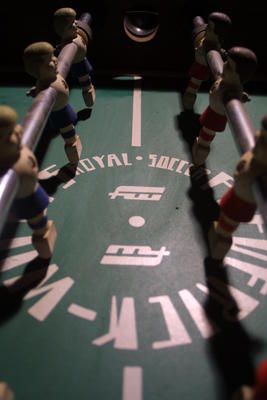 When I got laid off from IBS, I joked that Melissa and I had been fired for having sex on the foosball table. Apparently the story made the rounds. Should I be flattered? I mean, to successfully copulate on a foosball table would require some interesting acrobatics. 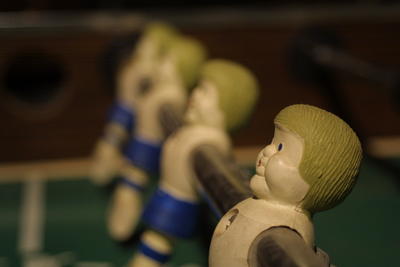 Lisa sent me a cryptic email yesterday that referenced my hit song “Present for You.”

It’s in the driveway upstairs

When I got home and peeked under the tarp, oh! Foos! Lisa helped me move it into the garage and I schooled her, six to two. It may be a crappy table, but IBS had a crappy table, too. Yes, I want a Tornado, but foos is foos. 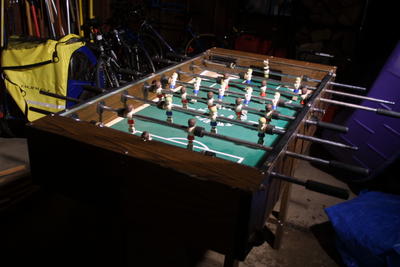 In other news, the strong lock for my bike needed some lube the other day — I needed a hammer to drift it open. Freewheel had almost warrantied it before their Tri-flow finally weaseled its way into whatever moving part had seized up. I’m very glad that I have that particular lock, because I have seen two locks cut open on campus. There was a severed padlock by the bike racks in front of the EE/CSci building and a cleanly sliced cable lock in front of Coffman. I don’t know why thieves bother to cut locks, because I keep seeing poorly locked bikes on every rack. My bike is less of a target thanks to bikes with unlocked quick-release wheels, locks only through the front wheel, and once, a bike with a lock around the fork. All a thief would have had to do is pop open the quick release for the front wheel, remove the wheel, slide the lock over the fork, and then reattach the wheel. Free bike!

I’m considering replacing my front U-lock with a new U-lock. I probably won’t buy another New York lock — maybe one of those mini U-Locks since it’s just for locking the front wheel to the frame. I’m also still thinking about panniers. Yes, I still need to pick up some lube for my drivetrain and one of those chain-cleaning machines. While I’m at it, a mechanic’s stand, more tools, a cycle computer (speedometer/odometer/awesomeometer), sexy spandex underpants, a rocket launcher, a helper monkey, a boombox, a sidecar, and, and, and, and, a pony. Who says that biking is cheaper than driving a car?

On the other hand, my legs have stopped feeling like pounded thin steaks. Now they feel like delicious roasts, ready for the oven. It’s getting harder to push myself on the bike because my pace and strength have increased to the point where riding faster either means crazed aerobic spinning or frame-bending torque. Lest you think that I’m getting cocky, every time I start to feel smug about passing more casual riders (usually on squeaky mountain bikes), I get passed by a rider in lycra pants wearing $100 sunglasses. The last time I got passed was on Johnson on the bridge crossing 35W. I was beat from trying to grind out some speed through the long preceding straight and he slid by easily. Chagrined, I gave a little extra and pulled within a couple of car lengths. I took to the sidewalk in front of the water park because I fear the insanity where the freeway empties onto Johnson, and by the time I was to the next street he had gone through the road rage intersection, climbed the following hill, and was a block ahead of me despite taking the long way. This made me so grumpy that I climbed Johnson standing up, chugging uphill like the angry engine that could.

I sort of hope that no one I know ever sees me riding because I’m always grunting and twisting my face with spasms of suffering. My legs light on fire. I swear at Kenny Loggins. I focus on breathing deeply and evenly, but when I stop for a red light I heave and gasp. The crisp air of fall turns breath into exhaust. I unconsciously clamp the brakes and paw at the pedals. Well, that’s what it’s like, except that I’m usually a little dizzy, so I probably just look stupid and out of shape.

However, my lungs tell me that I’m finally over having been a lazy ass pack-a-day smoker. Hooray!

3 Responses to “Apparently, I rock. ”