Of course, classes start on Tuesday. I need to get in to see my academic adviser (again) to get my Satisfactory Academic Progress appeal signed (again, every fucking semester), but now I can’t just write off my credit completion ratio failure as all from the 1996-1997 school year, since I failed failed failed Diff EQ. How will that look on my unofficial transcript? There’s no way that I’m going to get the sort of job that will really challenge me. Although, Google is hiring an admin assistant to the two company founders. I think that I’m uniquely qualified to handle such a position. If only I already had my degree.

I drew a picture of a flying saucer watermelon being piloted by Bigfoot with Nessie and a chupacabra fornicating in the back seat while the Flying Spaghetti Monster throws a robot at them and the Kraken tries to pull them down into the depths. A pirate ship is coming, but is it to rescue them or take their booty? Only your imagination will tell. Why is there a ninja? Why wouldn’t there be a ninja? I’m gonna go have a nervous breakdown in the bathroom now, and by that I don’t mean take a stinky dump. 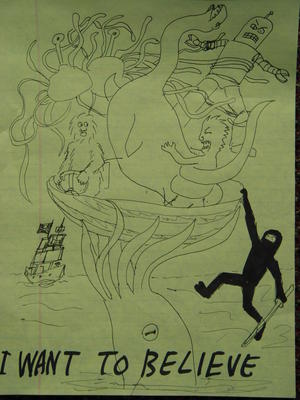 I swear that I will figure out what classes I will take this semester before the $50 fine — I mean fee — for late registration kicks in on Tuesday.

8 Responses to “Make up your mind ”