So… How Was NYC, Then, uh, You Haven’t Really Said Anytthing

Okay, so it’s probably time for me to relate the tale of NYC III: The Search for Spock, but firstI have to say that I’ve been fucking tired all week long and it’s just getting ridiculous. I barely had the energy to go to Grumpy’s and the strip club with Cake Woman last night. Yes, that’s right, Cake Woman took me to a strip club for the first time, it was a strange experience, and not really worth relating. However, I have a million pictures from New York, and I will share a few of them with you here. 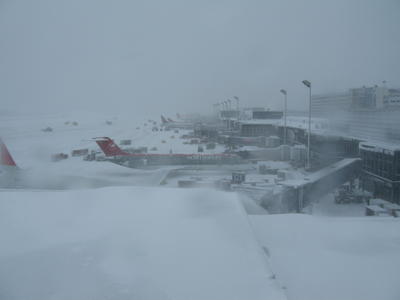 So, we were scheduled to fly out at 10:30am on Monday the 13th, which, if you remember, was the day of that fucking blizzard. I was making us late, so Cake Woman was pissed at me straight away, but on the way I called United to check on the status of our flight, which was delayed by a half hour. I had never been so glad to hear that my flight was delayed, but the last thing that I needed was to cause us to miss a flight by fifteen minutes or so at the start of the trip. As you might imagine, we had no difficulty getting there on time after that, since our initial flight was canceled. They put us on another flight that was then delayed by six hours, and it took us until after midnight to land in LaGuardia. 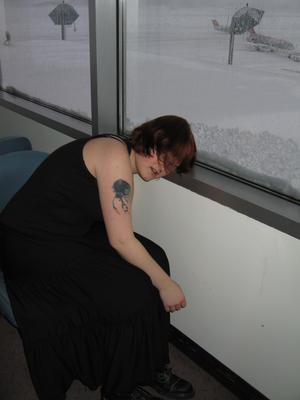 Between the two of us we spent probably fifty dollars in the Minneapolis airport. Cake Woman had salad and I had some sort of bagel dog. If you have to wait in the airport, I recommend finding the observation platform. It’s a nice place to wile away a few hours of blank staring at blowing snow. 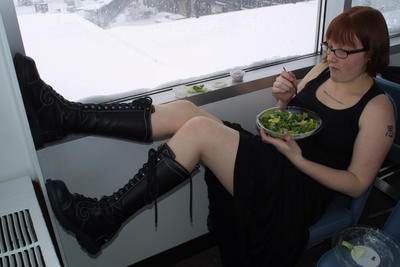 When we finally got to La Guardia, we stepped outside into nearly sixty degree weather. We were the only people in line for taxis who were only wearing t-shirts. I was sweating despite being pantsless — or perhaps because I was pantsless. Who is ever really prepared to be judged? We laid judgment upon the airport for their interesting spelling of “baggage.” 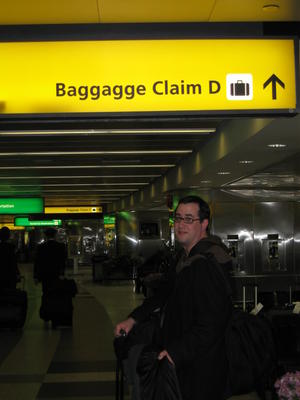 One in the AM found us stumbling into our shipping crate of a hotel room. We were staying at the Hudson Hotel, perhaps lured by the hardwood floors and Ikea-esque furniture shown in the room photos, but it wasn’t until Cake Woman had already prepaid that we found out the the rooms were exercises in space conservation taken to ridiculous extremes. The promised 150 square feet seemed to include the bathroom and the dividing wall between the sleeping area and the converted crawlspace that served as a makeshift bathroom. At the very least the room was extremely clean, and a maintenance person fixed our occasionally inoperable light fixture within a few hours of Cake Woman making threats into the phone. Plus, as long as I stayed on the bed while Cake Woman played Tetris with our clothing and bags there was plenty of room for her to flit about the room. My only real complaint is that my knees touched the wall when I sat on the toilet. If they would have simply installed it sideways I could have either tucked my feet under the sink or in the shower.

I had hoped to spend Monday evening having dinner and then planning Tuesday’s activities. Somehow I hadn’t gotten to sit down with Cake Woman and find out which museums she really wanted to see — did she want to visit the Guggenheim or the Frick? Instead I lounged in bed in a gray stupor for a while until Cake Woman turned off the lights — then it was suddenly morning and I had to scramble to get a vague plan together. The one thing that I knew, or at least thought that I knew, was that we needed to get over to the 6 train to get anywhere interesting, so I copied over a few addresses and grabbed a couple scraps of paper with other addresses written on them before rushing out the door with Cake Woman to assault New York head on. I guided us to Central Park, which was disappointingly brown and uninteresting, but only a couple of blocks away. My feet picked up my New York pace, which is much faster than my Minneapolis amble — in fact it is almost my Minneapolis run. Cake Woman glared at me continuously as I outpaced her, walked into her, and generally was a terrible walking partner. (if you are curious, my New York run is about equal to my Minneapolis get thrown out of a moving car) 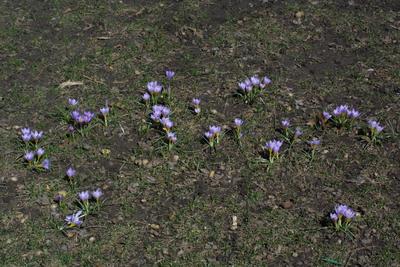 We did see a few flowers blooming in Central Park, which seemed miraculous to two Minnesotans fleeing a foot of snow. Somehow we didn’t take any pictures of the horse-drawn carriages at the south end of Central Park, just random buildings and churches. We crossed back and forth over Madison Avenue and Park Avenue before making our way down Fifth to Saint Patrick’s Cathedral, Rockefeller Center, and Grand Central Terminal. 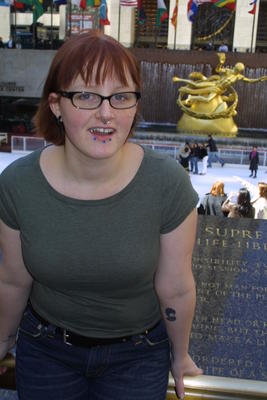