Everybody’s workin’ for the weekend

Except me. I'm locked into an insomnia swing set. It's like one of those magnetic desktop swinging things, like seem like they're about to pick a direction but then suddenly spin around in a crazy whirlwind.

Not that I've been spinning around much. Mostly I've been programming and watching CNN, because all the Iraq news is new at 3AM. It's the biggest train wreck that I have ever seen. I have already discussed the war at length, and I think that I will not bore you again with that today. 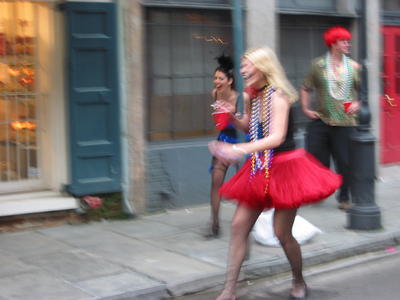 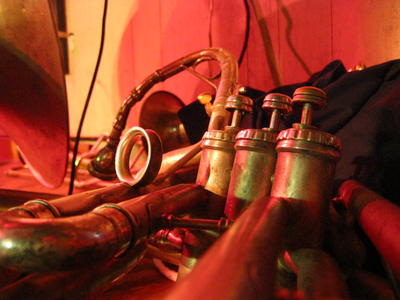 I picked my mom up at work today, and in return I got a six pack of delicious Summit Pale Ale. Now that's service. I showed her my Mardi Gras photos, and she reminded me that I have some really cool shots in there. If you haven't already, please check it out.

My mom's husband, John, showed me his new PC mastering studio. He's using Wavelab, and it's pretty sweet. He has officially gone from confirmed luddite to freaky nerd hacker guy. He replaced the cooling fan on his video card with about 60 pounds of copper heat sink. It's so wrong, and yet so very right. I'm so proud of him.

Back in the day- late in 2001- John and my mom wanted a PC. They got a free used PC from John's work. I pulled that PC apart and used a few bits from it to build a working PC for him. At that time John and my mom had a budget of whatever money I could contribute. Within a year they were getting high speed internet service and buying laptops. Now I can't visit without spending an hour on their PC - as they show me things!

So tomorrow is another job interview. Perhaps “job interview” is too strong a word, since I'm going to a temp agency to sign up and take a battery of tests. ProStaff hasn't been making with the jobs, so I'm trying a few others.

Four years ago, when I temped, I would finish a job and I'd already be taking calls for the next one. What happened? Argh. I just want to work, and it's making me crazy.