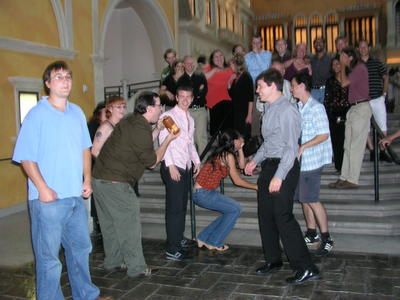 I haven’t yet taken a picture of it, probably because I am afraid that it will be like a horror film, where even looking at a picture will deliver you unto an unspeakable two or three day hangover where you wake up in the middle of the night and empty the dirty clothes out of the 18 gallon laundry tub because you just might throw up all of Las Vegas at once. Did you see that Poltergeist sequel where the guy threw up the worm that turned into a dude that tried to kill him? It felt like that was going to come out, so there was no way that I was going to let it anywhere near the knives.

Until I get a better picture of it, here’s what it says on the bottle. I am very good at internets, but I cannot find this anywhere.
On the front:

The back, in English — sort of:

Urkhorn is burned finely from pure wheat, by the traditional recipe from 1895. In long storage it matures to milder wholesomeness and fuller taste harmonics. Thus an vintage Kornbrannt of straightforward naturalness is offered to the connoisseur.

I am afraid to have it in the house, but it is my burden now. I will keep it secret

I will keep it safe.