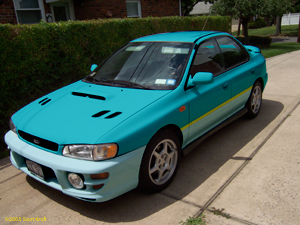 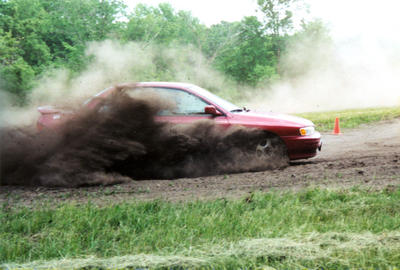 I found my new dream car(s)

If there is one thing that I learned this weekend, it is that it isn’t really a road trip until someone cuts a silent fart so foul that you have to pull the car over and run away. You know what I’m talking about - the kind of fart that makes you accuse your car-mate of sticking the Necronomicon up their ass so that their colon could open a portal to hell to release a dark lord of hellfire.

All I’m saying is that if you release Cthulu from your bowels, you should roll down your own window. It’s a safety issue. The driver’s vision could be obscured by the brown fog.

P.S.: It was my mom, and it doesn’t have anything to do with what happened later, I just needed to cleanse my palate.

The car in its original packaging

No, not really. I got a new USED car. $800 and a trip to Saint Cloud to meet a nice couple of teachers. Lisa and Noah came with - we put the car seat, DVD player, and a portable screen in my red car - and Noah was really good the whole way! The car is a 1995 Subaru Impreza LX with an automatic transmission.

As you may know, I already have a red (crimson pearl) 1996 Impreza LX (which I still have a painful love for [story of my life]), but that car is missing a headlight and needs a ton of work that I have ignored over the last couple of years while doing things like paying off my credit cards (and that car itself).

Anyway, Lisa can drive the red car to the grocery store until I figure out what to do with it. My gut says to start throwing money at it again, but we will see. I know how much the bodywork will likely cost. I have a vague idea of the cost of doing the brakes (the rotors are warped) and fixing that lingering tapping sound in the engine that is probably a leaky oil pump seal. In the meantime I have a more reliable car that is only missing A/C and cruise control. Also, the outside is beat to heck - apparently the former owner did not know how to park.
Okay, so now I have a red one and a green one - all I need are the yellow, blue, and black ones and I can form Voltron.

Re: [MN-Subaru] Since we’re all talking about super sticky summer tires

Of course it snows again. Welcome to Minnesota, I suppose. I got inadvertantly sideways (while driving in a straight line) on highway 7 in Hopkins tonight. If you're driving in the tracks, make sure that you pay attention when the tracks swerve. I hit 7″+ deep sno-cone material and the
car just snapped sideways 80 degrees to the direction that I had been going. Thank goodness that I had gotten half a mile ahead of the cars
behind me.

Right as I straightened out again a person coming the other way went into the median. Then, not a quarter mile later, I saw a car in the opposite lane silhouetted against the headlights of the traffic coming that way - completely sideways.
Oh well. Not much snow left, I think.