Dear Linear Algebra and Differential Equations Class That I Hate

I think that you can tell where this letter is going, so I don’t need to write the rest of it.

Is This the College Life? 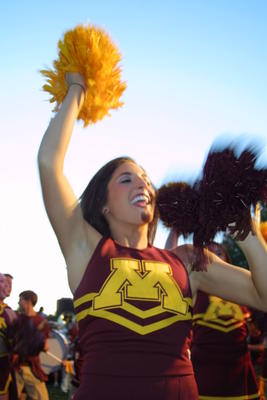 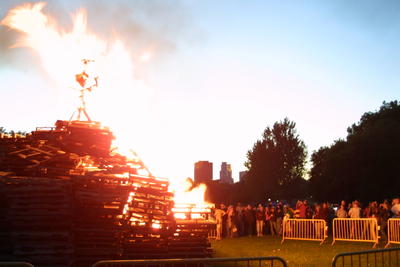 Maroon and gold were aflame in the East River Flats on Friday. I stayed on the clock late to shoot the homecoming pep rally stuff for SAO and ended up having a pretty good time. Since I’m on the ins with the staff I was able to sit next to the judges of the cheer competition, which meant that I had a front row seat for the whole deal. Sorority girls and cheerleaders danced and did high kicks mere inches in front of my face.

I love marching bands, by the way, but they should cut loose with more stinky funk — as in: any stinky funk. Make use of your tubas and percussion. Better yet, make use of your whole band to get some booty motion in order. Spread the stink on the crowd!

Uh, yeah. I got paid (my hourly student employee wage) to take pictures of the cheer competitions and the bonfire. That’s the life!

Art 1101W runs until 10pm on Wednesday. That’s four hours of trying to stay awake in a dark room while a smooth-voiced professor talks quietly about art. Like most of my classes, it’s a fight for consciousness. Nothing against the class, but I could have the art book in the bathroom for a week and get all the way through it. Actually, that’s not a bad idea.

During the seventh inning stretch of the class it started pouring. If you live here in Mineapolis you probably heard or saw the impressive thunderstorm that stopped by to knock down trees and power lines. As class ended I called home to inquire about a ride, but the rain seemed to stop, so I threw caution to the wind and jumped on my bike. Riding at night on wet streets lends a special feeling to the commute. Spray from my front tire leapt into the beam of my headlight as a continuous fountain.

Unfortunately another deluge hit just after I crossed Broadway. I slipped into shelter at the EZ Stop. Stan picked me up from there, but the rain seemed to let up as soon as I got my bike into the back of the station wagon. The drive up Johnson was eerie. Traffic was absent and the shops slept in silent blankets of darkness. Our headlights seemed to disappear and buildings slid away into fuzzy blackness as we swept by. One of the branches of one of the elm trees bearing an orange “X” on our street was blocking the entire width of Ulysses. At least the power was on by the time I got home.

My beer at the Nomad was a little disappointing. The bartender carded me with a serious look in his eye, but my Beamish was pulled hurriedly. Only a handful of patrons stood amidst the bar stools. No music was cued up, or the music was too quiet. I couldn’t quite get settled, so I drank up and headed to the deli to pick up my gyro. I got a shocked look when I responded that yes, indeed, I did want all the hot sauce that was offered, but it was worth it because that gyro was spectacular. My bike and I shared some of the cucumber sauce. It’s a good thing that it rained, because I didn’t quite get all of the sauce wiped off of the bike before parking it.

Tonight Zach and I went to Stub and Herbs. He had a beer and and I had an Summit Oatmeal Stout and the flavorless pasta special. We managed to talk for a bit about the Whittier project. I think that I am going to have to bust out some prototype code for restaurant location management and mapping to get the ball rolling. Imagine Google Local but more specialized: neighborhood (and/or city) specific, with hand-tagged data, and with a focus on restaurants and bars.

Before I get to work on another web project I have to work on homework and some sort of Gallery stuff. At work I will be making a new site that blends text posts with image, video, and sound management. I think. Maybe.

P.S.: I wrote this entire post in class, and I have answered so many of the teacher’s questions that he called me a kiss up, despite the fact that I have been mostly ignoring the teacher for two hours. Did he not notice the laptop on which I have been furiously typing?

The other day Melody asked me over AIM (yahoo? I dunno which instant messaging protocol, it doesn’t matter, I say AIM like Kleenex now) if I was okay. She said that I seemed down.

Okay, now, after the lot of you stop laughing because she had to ask if I was down, here’s the weird part: I wasn’t. I was busy working or looking on ebay for stuff that I don’t bid on because I don’t need it but isn’t it nice to know that I could buy a ceramic monkey statue if I wanted one and whew I just killed an hour without making my brain do any heavy lifting. So, what is important about someone asking me if I’m okay? I dunno, she’s one of the few people to have asked it right. When I am actually feeling like crap (which, believe it or not, happens) I always want someone to ask in the pointed, tenacious way that she did. Good luck trying to get that exact phrasing and attitude correct. The wrong approach will likely just annoy the shit out of me.

I’ve been happy with the whole school thing this semester. My classes are filling the usual pattern:

I’ve even been enjoying the torment of exercise in bicycle form. My Surly is comfortable and fast. I can pick it up with one hand without even a grunt. It hurts like hell to ride up Johnson and my ass hurts when I get on the bike in the morning.

Goddamnit, I like my boss’s blog better than mine: The domain of Xopl. This should not come to a surprise to those persons who regularly visit my junk drawer of a web site. I could have gone for booze with him tonight, but I don’t want to worry about not being able to catch a bus back from the useful parts of Minneapolis at bar close.

I wonder if anyone is home. I need a drink. Maybe I should bike to Grumpys.

I rode my new bike to school today, which meant that I didn’t bring any coffee. Fool! CSci 4041 made me very sleepy, so the natural thing happened. It seems that I have synced up my class schedule with all of my junior and senior friends, so three of my classes will be populated with nerds I know, and the other one is my art class. I am the win!