I was trying to get an A for once. My last assignment came back with a B+, so fuck that.

I’m probably just going to pick one night (tomorrow? Wednesday?) to go take pictures of ten buildings, then another to adjust the color of all of the pictures, then one more to print ten images. Then I will be done with class. Hooray! What a fucking waste and a drain. Bullshit.

I was going to post about trying to apply for additional loans during the summer session, but it was just a long, angry rant. Suffice it to say that Onestop advisers gave me incomplete, incorrect, and conflicting information over the course of a half dozen emails and phone calls, and that when I finally talked to the person who eventually denied my request (without notifying me), she didn’t actually care that the website does not contain useful information.

“Not everyone reads that site anyway.”

Jesus Hairy Christ on a dog gammed pogo stick, it’s not like it’s my blog, it is the official communication of the University on the subject of loans.

A professor found a bomb threat on a note in Smith Hall across the street from me. Since I work on the fifth floor of Coffman, we have a unique vantage point for watching the ensuing evacuation. Written on Tuesday, the 6th of February, 2007 at 7:31 pm and was filed under: Photography, Nerdity, school 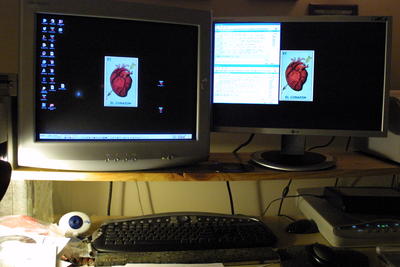 One of my monitors died last week, so I bought a nice new one. It was a bribe to get me to work on my CSci5161 homework. It seems to have worked! Hooray!

I finally got into that English Literature 1701 class on Wednesday nights. It’s modern literature. So for we have read five short stories and watched one movie. It’s like high school all over again!

Sarah and I had our first class together: ArtH 3940/5940. It’s all things Hitchcock, which is so glorious that I cannot speak. I had a little trouble staying awake during the lecture, but the film was The Lodger, which was quite good, indeed. No, Sarah and I did not make out during the film.