I threw my chain three times today. Two of those times were during my inaugural night run home, at ten, after my art class on the west bank. If you know of good cheap food on the west bank, or would just like to eat with me on Wednesdays between five and six or after ten, you should let me know.

The second time the chain jumped I got off to fix stuff and spent some time staring at the lighting and thinking about where I could put a reflector on the back to supplement the flashing red LED. A dude pulled up and asked if I needed help. When I said no, he made a u-turn and drove away. Wait, what? A u-turn? Weird. Anyway, I’ll be looking into a reflector for my rack. Heh heh, I said rack.

Oh yeah, I’m holding 200#, even with the Chipotle burrito that I had today. I predict that I will have my first sub 200# weigh in this week, unless I eat a small child, which might happen. I’m super hungry right now. Unfortunately, if I eat Noah I will never be able to use him to pick up chicks.

No! I will never do that!

I bet he’d be a big hit at the Entry. He likes music. Hmm…

The bike to school/work was a lot better today, what with the cool weather and all. On the other hand, I am not really looking forward to riding home in the rain. Jeremy said that he would probably be willing to trade cranks straight across, and I think that in another month or so I will be very interested in such a thing. Even today I was going flat out on the downhill of Johnson and keeping a car at bay. In another month I will probably have outgrown my top gear and I’ll be ready for the 39/53 action. Hooray!

Maybe not. Like I told Jeremy, I want to ride more to make sure that what I think that I want is what I want for real.

Today it was me who forgot the key to the garage — I left it clipped to my pants while I sailed to work. While I parked my bike, a cute woman pulled up nearby on her bike and smiled at me. I smiled and futzed with my lock a bit, then looked up and smiled again. At that point she looked at me funny, then said “sorry, I thought that you were someone else” and booked out of there. For the love of Pete, just bike away, leaving a smile behind for those of us who don’t get a lot of random smiles! After that I climbed into the bell tower and rang my bells for several hours while sobbing uncontrollably.

If I weren’t so terribly ugly, I’d smile at random people just to make them feel better about life and themselves.

Oh yeah, I almost got hit by a car on the way home because I was feeling all cocky and blew through a stop sign. Oops, I’m a dumbass.

Eventually I hope to truly conquer the Johnson street hill — ride up it in a surge of power and stamina. Right now I ride up in the granniest of my gears and feel like I’m going to die every fifteen feet. Awesome! I haven’t been this drenched in sweat since I walked home that one day. ¡Que feo! 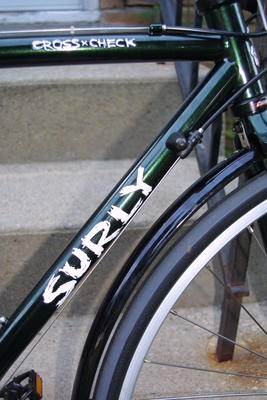 The seemingly endless research and conversations with anybody who had any interest at all (mostly Jeremy, thanks, man!) led me to try out the Surly, and it was the best fit so far, period. It felt more sprightly than the Volpe, but strangely, it mostly just felt like mine.

I rode it home from Freewheel, which is a mere four and a quarter miles, but I felt like I could do another ten. Somehow I didn’t, but just the same. Ahem.

I spent the rest of the evening futzing with the bike. I forgot to get a rack at Freewheel — or maybe I just didn’t think that I would need it — but I wasn’t satisfied with the mount for the bike lock so I picked up a shady rack at Target. After I put that on it was dark, so I went to try out the headlights and the lock storage solution. Somehow my foot, the tire, and the front fender all tried to occupy the same space-time coordinates and I bent the shit out of it. I’m pretty sure that couldn’t happen at speed given the necessary severity of angle, but still I’m glad that I normally wear a helmet.

Oops, I didn’t get a chance to post yesterday. I did prepare notes on bikes to take with me to the bike shop. After discussions with Jeremy, even more internet “research,” and a lot of thought, I had narrowed my bike choices to the Bianchi Volpe and the Surly Cross-Check Complete. I went to the Hub and Freewheel, but it was raining more than I wanted to ride in.

Later, Lisa and Stan babysat for the Wiggenhorns. I woke up from a nap to find baby Ben crying and seemingly inconsolable. Lisa looked a little overwhelmed, so I took Ben and bounced him until he fell asleep.

Then, I went to the Bulldog with Greg. Hooray!

Also, interspersed in all of that was a ton of Katrina surfing.

My mom works with this doctor who is biking across the US.