My Mexican Folklore class is having a potluck on Wednesday. I’m thinking cochinita pibil, or some sort of mole — perhaps one of the seven from Oaxaca. You know you want my meat.

A week or so ago Cake Woman gave me a bag of baby spinach to eat. Needless to say, I was unable to consume a large enough quantity of sammiches and salads to use up a bag of raw spinach. Not wanting it to go to waste, I decided to cook it up, greens-style. It turned out okay for something that I literally just threw into a pan and ate, so the last time that I went to the store I decided that I should get some greens for realZ and try to do it up southern-style. Cake Woman has banned pork, so I didn’t pick up any swine knuckles or other waste meat to simmer down, but a bucket of garlic, some green onions, and a New Mexico (Anaheim, Hatch, whatevs) pepper rounded out the fixins’.

Where To Eat Out

Terry and Craig were over dropping off a hard drive for their PC and the Keathlys and I were having a sit down with them about all sorts of stuff, including food (of course). For those of you who don’t know Craig (you might have met him at the Halloween Party, but by the time he showed up, I, uh, well, I’m not sure if he came or not, but I think he was there). Anyway, he works at Pizza Biga, and we talked about all sorts of pizza places around town. Angino’s came up (and not necessarily in a positive light) and Stan asked which place we were talking about.
V-A-N-G-I-N-O-S?

When Cake Woman was over on Friday we made gnocchi. They were delicious, but they took forever. 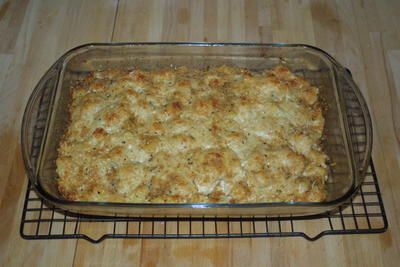 Must… Not… Drunk… Dial… Girlfriend…

“Okay, now go post the whole night for all of your internet friends,” Cake Woman said as we were driving home. Later, she amended her comment: “and don’t you say that I made you write all that stuff.”

For those of you keeping track, yesterday was the 14th, which was the first monthiversary of Cake Woman and I starting to date (not that she admitted that we were dating at first). Okay, the word is mensiversary, but I’m no stickler for accuracy. Cake Woman had promised to take me to dinner “just because,” and while she was at work I remembered the significance of the 14th, so I put together a plan to make or buy a card for her once I had finished at least part of my programming tasks for the day. Time spent itself quickly and I found myself sweating over the racks of blank cards at Patina. It struck me that Target actually had a better selection, but I found something that didn’t disappoint me too greatly.

“Whatever you do, don’t let on that I remembered the monthiversary or got her a card,” I instructed Lisa and Marsha. They disapproved of my choice of clothes for Muffuletta, but I wore my Walk Mink shirt anyway — you know — the one with the picture of a cock on the front. A rooster! Secretly I hoped that Cake Woman would mention the monthiversary. I planned everyone’s lines in case of such an event.

“You know, today is Jesse and my monthiversary,” Cake Woman would say to Lisa. “He better not have forgotten — after all I’m taking him out for an expensive dinner.”
“It is? Jesse didn’t say anything… That’s so cute, you two,” Lisa would answer.
“You’re such a cute couple,” Marsha would interject. I would throw my best sheepish look.
“I forgot,” I would say in my smallest voice. “I don’t suppose that we have time for me to stop and buy a card…”
“Oh, god, let’s just go,” she would say, rolling her eyes as I apologized, even though I would have had the card already in my pocket. At that point I might have run upstairs to make a red herring card with kindergarten lettering in mismatched crayon.
“Look how cute my terrible card is!” I would have exclaimed, as though being forgetful were somehow acceptable instead of annoying.

Unfortunately, she forgot, so I was stuck with a secret until she placed her order. She lingered over the menu hesitantly. It took me longer to pick my beer (and I just fell back on the Summit India Pale Ale anyway) than to pick the braised pork. I waited while she picked three appetizers. I waited while she picked a porter. I waited while she picked the wild rice hotdish. Finally she ordered and the waitress gave us some sort of lentil-based food on thin slices of bruschetta. I stopped her from putting food in her mouth so I could give her a card. I got smiles and an over-table-kiss, so my vast efforts to restrain myself from giving away the surprise early (like, in a text message, on the phone beforehand, in the kitchen before we left, in the car, when we sat down, etc.) were successful.

Food arrived at our table in spurts of amazing. If I had been expecting to post about the food, I would have taken notes, but there were lamb things in triangles, calimari (for Cake Woman, because I don’t know if my seafood allergies extend to cephalopods), three kinds of cheese (for me, because, well, I fucking love cheese, motherfuckers, and Cake Woman merely tolerates it), bread, weird crackery things, single-source honey (it tasted like buckwheat, which was interesting, but… uh… maybe your single source could be something like flowers), olive oil with an island of garlicky hummus, my pork shoulder, Cake Woman’s hot dish, and beers. The braised pork shoulder was the best pork shoulder that I have ever eaten, and I cook it myself. It was tender. full of porky flavor, and better than any pork shoulder that I have ever cooked. I almost needed a spoon to eat it because it was so tender. Every strand of muscle tried to go its own way when I raised my fork to my mouth. Cake Woman got many needless reminders of my “O” face as I ate — it was that good. Cake Woman was not particularly enthused about the cheese in her hot dish, so most of it is in the fridge here at my house. I will eat it — it’s my job to eat leftovers.

When we got home Cake Woman monopolized the internet while “Best Week Ever” played. I have given her a lot of shit about consuming mass media in it’s nastiest steam-cooked form, but she likes White Castle, too, so I shouldn’t have been surprised. Honestly, I would watch hours of Best Week Ever, just like I could eat bags of M&Ms, and that’s why I don’t buy the two pound sacks of M&Ms. Cake Woman had some stuff to do, but stated that she would have rescheduled it if she would have remembered our monthiversary. Just like a man!

She left and I finished out my evening by telling Paul that I had a big present for him that came with balls. He said that I was gross until I let him know that we did not have room for a foosball table here.

I’m also probably going to get rid of a lot of books in the next few months, so if you’re looking for science fiction or complicated literature, please let Lisa know that you will be fighting her for them. I might hire a dumpster (not for the books), too.

Have Your Cake and Eat It, Too!

The whole “biweekiversary” thing started as a joke, but it got out of control pretty quickly. Things escalated, cards were given, and cakes were baked.

I brought the cake to work, and there was some questioning whether it was a cake of celebration or letting down — the question being if the suffix should be “hooray” or “and that’s all you get, fucker.” Really, the proper appendation would be “thus far,” because Cake Woman is really fit, she’s fit, but my gosh don’t she know it.