There’s a default argument $_
Wouldn’t that pick up the value of shit, since it was the last assignment?
while $_
$_()
end

But then, really, since it is the default argument, can’t you just do

or, really, since it’s the default,
while
end 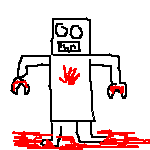 Genius. I’m so glad that Zach is part of Team Kickass now — the three of us together are more powerful than you could possibly imagine.

Words to live by

It’s not the length of the algorithm, it’s the big O.

Written on Tuesday, the 8th of November, 2005 at 2:30 pm and was filed under: Photography, Nerdity 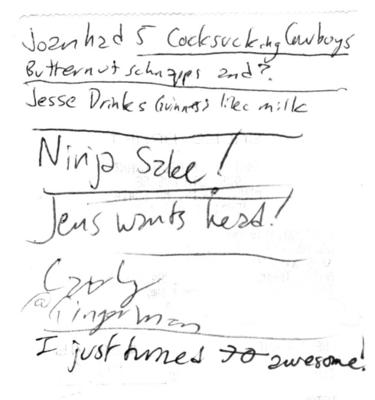 When They Say Unstable, I Guess They Mean Unstable

I’ve been running debian unstable for a long time with seemingly no problems — until just this week, when everything went haywire and my server crashed a couple of times a day. I rolled apache and php4 back just now to the…

Written on Tuesday, the 1st of November, 2005 at 11:30 am and was filed under: Wallowing, Diversions, Nerdity

There’s something wrong with my server or someone is attacking it in the wee hours. I’m terribly sorry about the service interruptions. Maybe if I switched to Windows it would be more stable! HA ha! HA! Sigh. My server has fsck’ed itself three times since Sunday. Even my server is getting more action than me!

Okay, really I’m just jealous that Melissa is dating again and has found someone “very sweet and nice.” I’m not so much jealous of someone kissing her as much as I want to be the one kissing boys. GIRLS! I want to kiss GIRLS! I’m glad that she seems happy, she deserves the best.

Paul walks down the street and women fly out of their houses towards him. He sits in class and panties fly across the room to stick to him. I think it’s the hat. He has a magnet in it. I should get a magnet. And a hat.

I shouldn’t write anything before my brain comes online. Sorry about that.

Zach has been having a series of orgasms on the other side of our shared desk, so I guess that script.aculo.us is the amazingest of amazing. I’m not having the same response that Zach is, but then I haven’t been playing with it all day for two days like he has.

Prepare to be unspammed?

Another anti-spam tool? I’m starting to think that you can never be too well armed against spammers and other bastards.

Written on Thursday, the 15th of September, 2005 at 8:20 pm and was filed under: Nerdity, Speaking in Tongues

Whenever there’s an encoding issue or a question about Unicode, people tend to knock on my door.

Sound familar? If you’ve been on #gallery with me at three in the morning, you’ve probably heard me cursing character set conversions. This guy has apparently done even more cursing than I.

(this link is for people as nerdy as me)