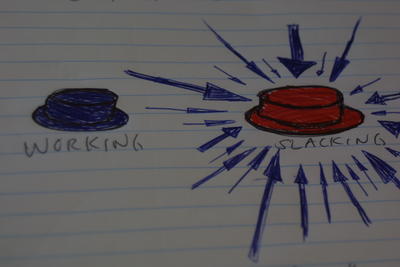 Thanks to Jeff the creepy guy who asked out my manager at the Speedy Market eleven years ago.

Somehow between picking clean clothes out of the hamper and laying waste to the bathroom, fifteen minutes went by and I was far too late to get my ass to the West Bank, so I opted for a heart poundingly refreshing nap and the traditional household dinner of french fries and pasteurized processed breaded chicken chunks.

I’m bumping that show to 10pm on Wednesday.

I gotta run in a minute. I’m off to “Cliff Notes” for Dummies presented by Third Rabbit Dance Ensemble. I expect great enjoyment and fun, and this will increase my fringe points to 3.

Who am I kidding? I rolled a natural twenty when determining my fringe points.

An 86% in CSci 4011 translates to an A-, which, when combined with the A in my two credit coursework and run through my combinatorial machine, produces a GPA for the semester of 3.78! Hooray! I don’t think that the Dean’s list includes half time students in the summer, but that would be cool to get there again.

Just as I saw that grade the sun came out. How’s that for awesome? I get to look out of my window and see the sun falling on lush greenery across the river.

I should get back to the Gophers Afterdark calendar, because it is terribly important.

Before I dated Melissa I was single for four years. Here’s to four more!

I got to both shows, but I was a little late for the first. Here is a one sentence review of each:

Adventures in Mating: This show was hilarious.

The Scrimshaw Show: This show had hilarious moments.

During the Scrimshaw Show I literally fell out of my chair when the skinny brother beat a Vonnegut joke into a fine froth. I’m not sure if anyone else was laughing, but he had me in the palm of his hand and squeezed. Then again, Cat’s Cradle was about a quarter of one of my four credit courses, so that comes to something like $400 just to get that series of jokes. My own particular take on comedy is that if you can make one person laugh until they have an aneurysm you have done plenty, even if everyone else in the room just looks at you like you’ve gone crazy. Way to go, Joe. If I may call you that.

Adventures in Mating was set in a restaurant on the surface of the sun, so there was no air conditioning in the theater. Maybe there is never any air conditioning there, I don’t know, it was just hot. In any case, very funny, but the audience participation was, of course, typically Minnesotan: lame and predictable.

I should put on some pants and get out of here to see if I can see Adventures in Mating.