I should totally write text adventures!

First you could play Stepdad:

I DON’T HAVE TO LISTEN TO YOU! YOU’RE NOT MY REAL DAD!
*slams door*
*door opens*
I HATE YOU
*slams door*
*Incubus plays really loud*
*A skunky smell like armpits rolls out from under the door*
*knock knock*
*there is a scurrying, and a window opens and a lysol smell rolls out from under the door*
> open door
the door is locked
> unlock door
with what?
> unlock door with key
you don’t have the key
> n
you are in the hallway.
> w
you are in the kitchen
> look
You are in a suburban kitchen. There is a junk drawer here
> look drawer
the drawer is closed
> open drawer
the drawer is open. there is a key inside
> take key
you have a key
> s
you can’t go that way
> e
you are in a hallway
> s
you are standing in front of a door. you hear incubus
> unlock door with key
DAD! WHAT THE HELL! CAN’T I HAVE SOME PRIVACY! I HATE YOU SO MUCH!

Or you could play “CC Club”, inspired by this terrifying exchange:

zach: WHY WON’T THE GIRLS FROM FOLK UKE MARRY ME
jessepmullan: the same reason why no woman will ever marry me
zach: your penis is too big too?
zach: funny we’d both have the same problem
jessepmullan: wanna swordfight?
zach: NO
jessepmullan: just wait for that one drunken night in the bathroom of the cc club
zach: I will so use the stall

> open door
the stall is locked
> unlock stall
there is no keyhole
> look
you are in a dimly lit bathroom. there is a strong smell of urine
you hear zach in the stall yelling “you are NOT GETTING IN HERE”
> e
you are in the bar area of the cc club. Many women are ignoring you.
> look women
the women are hot but unattainable. A hipster douchebag asshole is going home with one of them.
> drink
drink what?
> drink beer
you have no beer
> GIVE ME SOME FUCKING BEER

My homework is not done because some retard didn’t program the PriorityQueue correctly or some shit. I’m going to bed now so that I don’t get triple fired tomorrow. Melody says that I should chase down the cupcake woman. I think that I agree. I will be a cheetah on the savannah. Okay, really, I’m just a grumpy old male lion who lets the lady lions do all the real work like hunting and raising kids. Jeremy Irons will voice me in the animated movie based on my life. I think that my brain came detached somewhere in the course of writing this.

I had grand plans for my Saturday night involving an art gallery somewhere and an appearance at Paul’s roommate John’s birthday party with an armload of beer. All of those plans were dashed to pieces when my favorite surly lady said that if I were to be in the north suburbs I should come see her new bed. At first I was resistant, but she said “we could go to Coon Rapids Grumpy’s! There will be billa billa!” For a brief, terrifying hopeful moment I thought that maybe she had actually read some of my blog. No.

Words to live by

It’s not the length of the algorithm, it’s the big O.

Zach’s fucking blog got blog of the fucking day.

Hating on the Doodlebops? That’s my goddamn bag!
SEE: http://jpmullan.com/blog/261/the-doodlebops

That’s it. No more posting ever. 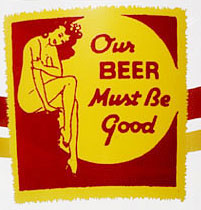 So Cake Woman works six days on and three days off. Her weekend this round was composed of Tuesday, Wednesday, and today, except that she had a ride along today at six AM which involved wearing a bulletproof vest and traveling at a speed of one hundred and twenty miles per hour in a Crown Victoria. Yes, I’m terribly jealous — the fastest that I have gone in a car was about 117. Despite only getting two hours of sleep and me suddenly remembering that I had to babysit after school, we still managed to hook up to do fun things. Most of the time the fun things that I do involve intellectual pursuits like television or reading on the toilet, so it was nice to break the tedium with some Addams Family Pinball at the Viking Bar and bowling at Elsie’s. Our penultimate game was my best game ever! I bowled a 119! I think that it was the Slipknot that turned my game around. I can’t say that I like metal, but sometimes you just need a little screaming to get your game on.

I just used my new cell phone in my room. Five bars.

Dear Verizon:
You are the ones who are ball lickers.

Zach is the genius of comedy

I Was In a Deep Sleep

I really meant to go vote, I just wanted to close my eyes for a minute…

Like Rhonda Shears and Gilbert Godfried I was up all night. This had deleterious effects on my sanity today. When I got home I slipped into a coma crossways in the big chair. I’m kind of ashamed of myself for not stopping on the way to school, or on the way home, or after I got home when Lisa and Stan offered to drop me off. Okay, terribly ashamed.

I wish that my classes were at night again, this interleaving classes into work really blows.