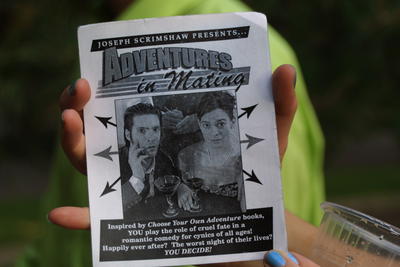 I know what I’m doing next week

Finally, this year I am GOING.

So, aside from all the shows with nudity warnings, what should I go see?
Adventures in Mating was recommended by a friend of Marsha’s

I think that Cake Woman recommended the Scrimshaw brothers, but I only got four hours of couch sleep last night, so don’t believe anything that comes out of my mouth. Or my fingers.

My smoke alarm is confused

I’m not on fire, I’m just really hot. Maybe I should put some pants on.

I definitely did not get enough sleep.

Written on Wednesday, the 3rd of August, 2005 at 4:35 am and was filed under: Diversions, Photography 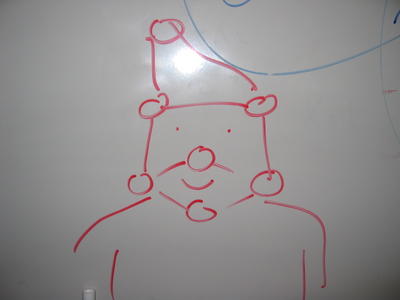 I just proved that Santa is NP-Complete!

I NEED TO GO TO BED.

Notice that I am shouting.

Argh. Okay, so I go home, change, go out, don’t drink too much, then go home and stay up all night to do this homework. OR I stay here in the nerd room and swear a lot because this is the most tedious homework ever.

If I were any more naked I’d be impossible

Anyone who is confused by my life raise your hand now.

In Minnesota the saying is to dress in layers. Well, I made a phone call and then took off some layers. I took off some more layers. I took off layers that I wasn’t even wearing, but still heat pressed down on me with a giant monkey hand, pressing me into a sleep full of very strange dreams, almost like hallucinations. According to my window thermometer it is 78 degrees outside and 86 in my room. Ugh.

Depending on your imagination, I may or may not be wearing any pants right now. I suggest that you decide which state is more appealing and only imagine that one. If that state is the state of pantslessness, maybe we should talk.