I thought Superman was okay. I didn’t expect it to turn into a pirate movie at the end, and it was kind of weird to suddently have Johnny Depp show up, but maybe I shouldn’t have fallen asleep in the middle. It might have made more sense if I could have actually seen Lex Luthor call up the pirates to fight Superman for him. But then, it wasn’t very Supermanish at the end — I mean, he wasn’t even there. Really, it was like one of those dreams where you’re trying to do one thing and you can’t quite do it, and then all of a sudden you’re at your old elementary school and you’re trying to return a book or something but you can’t find the library and there are Cthulu pirates. 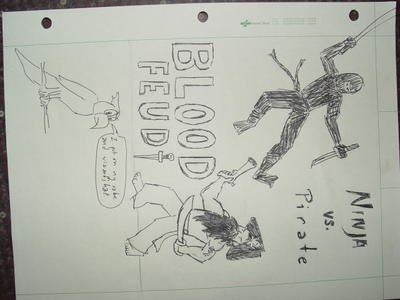 I did this in class today. I’m so gonna ace Linear Algebra.

I Put On My Robe And Wizard’s Hat

Cake Woman wanted to find a place to hang up her robe, so I started singing the BloodNinja exchange to her, assuming that she had actually been on the internet at some point in her life. She had not, so she looked at me like I was fucking crazy.

Legend of the Blood Ninja 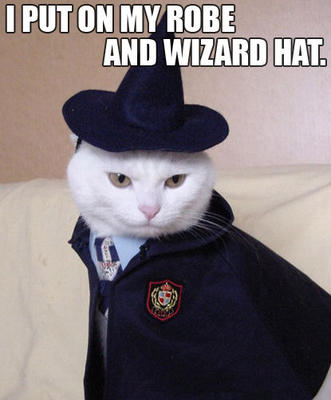 Zach left early because of some mysterious fumes from the third floor. He really missed out because after he left my spirit animal came and showed me the truth of everything. It was amazing. He sounded just like Johnny Cash.

A week or so ago Cake Woman gave me a bag of baby spinach to eat. Needless to say, I was unable to consume a large enough quantity of sammiches and salads to use up a bag of raw spinach. Not wanting it to go to waste, I decided to cook it up, greens-style. It turned out okay for something that I literally just threw into a pan and ate, so the last time that I went to the store I decided that I should get some greens for realZ and try to do it up southern-style. Cake Woman has banned pork, so I didn’t pick up any swine knuckles or other waste meat to simmer down, but a bucket of garlic, some green onions, and a New Mexico (Anaheim, Hatch, whatevs) pepper rounded out the fixins’.

Happy 4th of July and Shit

I had the day off from work and class, so I slept late. I hung out near Cake Woman a bit. Then I went to the Keathly’s for the final push. Lisa and Stan had hurriedly dumped my stuff into boxes, so for the most part I just picked up what they had packed and brought it to Anoka.

What About the BOUS?

The Balls Of Unusual Size? I don’t think they exist.

The other day when I was sick I watched the Princess Bride. Is it just me or is practically every line in that movie quotable?

I Think You Mean Woodland Creatures

I had a dream this morning where a midget had some sort of attack, and the 911 dispatcher transferred me to a doctor who said that the term for a little person is a “woodland creature.” I was really confused in the dream, because I didn’t see how that was going to get paramedics to the scene any sooner.

Then I got up and made myself a huge breakfast with beef, beans, rice, baby spinach, eggs, cheese, and a tortilla. It almost made up for the sleep that I had missed.

Tomorrow I make a whole new Internets for the Whole Music Club. Hooray.

Zach missed an angry phone call or two to Qwest today over the shadiness of my DSL. The first guy said that he was going to have something fixed and put me on hold. Then I got cut off. I called back and the second guy said that everything looked fine to him. I came home and the internet was still all screwed up. To make matters worse I couldn’t even connect from my desktop to the server in the same room. Frustration ensued as I fruitlessly delved into system logs on my linux box. It was getting bad packets some how. I put in the ethernet card from my other server, and the bad packet messages stopped, but the connection was still hosed up.

Then I remembered that I had plugged the wrong power supply into the switch. I took a chance on a new switch from Best Buy, and it was like dynamiting a dam. Holy crap the entire internet poured into the apartment in seconds. Amazing.