Dear Ibuprofen,
I know what you’re up to. It is not appropriate for you to instigate allergic reactions and eat away at the lining of my stomach and intestines. I don’t mind the nausea, but the rest has to stop. Except for making my knee not hurt. That is quite all right, and I would like you to continue your fine work in that area.

“No more gin and tonics for you, I need you to be useful tonight,” she said, her eyebrows arching to angry effect.

My linear algebra test did not go as well as I had hoped. I know that I made some regular algebra mistakes, since one of the matrices that I produced was by definition defective. That meant that parts two and three simply went undone.

I think that if I would have had another hour I would have been fine, but I’ve lost my intuition for algebra. I’m just not fast like I used to be.

800 mg of ibuprofen sounds like a lot of painkiller. Multiply it by three and you have the amount of knee-deadening I have been doing each day this week.

I WILL EAT YOUR BRAINS

With apologies to Aphex Twin.

The zombie pub crawl this year is on September 9th, 2006. I expect you to be there in full zombie drag. If you can’t get your own makeup together, have a voodoo priestess actually kill you and raise you from the dead again. I did, and I feel great.

Warning: do not let the fake blood touch anything that you cannot steam clean. Gross. 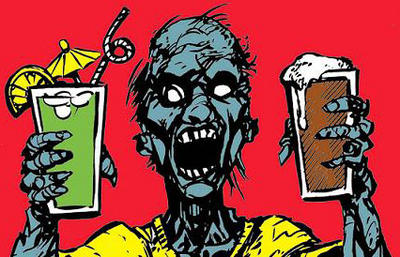 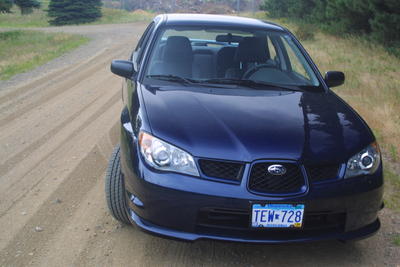 Just Cut It Off, Already

Yesterday my knee hurt. I woke up this morning at 6am or so with my knee so cramped up that I couldn’t move it. I hobbled to the bathroom and back, trying to be quiet, but when I crawled into bed again it was all I could do to not gouge out my own eyes just to take my mind off of my knee. Of course I couldn’t be quiet enough, but instead of waking up and killing me for waking her up, Cake Woman got me an ice pack. This morning she made me coffee and a breakfast burrito.

I took the afternoon off to pick up the plates for my car at the dealership and have them change the oil. In the future I will be scheduling such excursions outside of working hours, but I figured that 13 days was plenty of days to drive with an expired 21 day pass. If you’re thinking that I have become a heathen who revels in frivolous oil consumption, (perhaps because of some grumpy tirades I may have posted in response to the bicycle community’s fetishistic affair with their own two wheels) you might be right. I am gleeful in having a stereo to pass the time of my commute.

Last night’s Chipotle and a strong cup of coffee both cast spells on me this morning. I crapped so much that I saw my soul.

Today I borrowed my mom’s husband’s truck, bought a couch, delivered it, unwrapped it, returned the truck, helped my mom’s husband clean the basement for his upcoming asbestos abatement, came home, and took all of the packaging from the couch and all of the empty boxes from Cake Woman’s and my moves outside.