No Jmo in Vegas

The Gallery Developers “conference” is supposed to be in Vegas this year, but it looks like I won’t be able to go. :(

I almost typed salesemen. It’s a subtle difference. So I went to look at Dodge Neons at the Denny Hecker’s Dodge. Well, Neons or Hyundais or anything that would be a decent deal, but I had a pretty good idea what I wanted. Well. You know. If I’m not getting a Lotus Elise, what I would want. At first I was pretty happy with the sales guy because he was willing to walk me through the lot and show me cars, but unfortunately the cars were shitty. We finally got back to the front door, and I said that I was sorry that they didn’t have anything that I was interested in, so he said that he could look up anything in the Denny Hecker system. Anyways he came back and said that they could fix up the Neon on the lot to my requirements. It took forever for me to get a real number from the guy, price-wise, and when I did, it was at least 1500 over book. Amazing. I’m thinking of going back and making an offer three grand under book. When the salesman acts all hurt and says that he has to eat and feed his family, I would just reply with the deepest chagrin:
“I’m a poor car salesman, and I can’t afford…” — except in the voice.

Yes, it’s pretty certain that I will be moving to Anoka as soon as I get transportation ironed out again. I know that I have made my views on the suburbs plain, but Cake Woman works in Anoka and already lives two blocks from work. She would like to continue walking to work.

Dear Art-A-Whirl That I Miss Every Year

I think that you know where this letter is going…

I did, however, get to Kate and Pete’s wedding, where I took a few pictures. 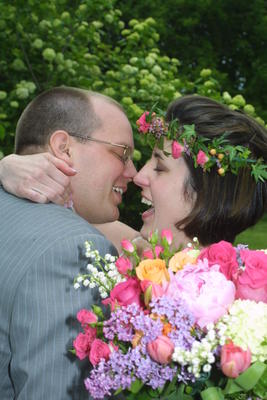 One, Two, Stadium’s Coming For You

“How can you sleep?” asked Jerry Bell, the Minnesota Twins chief stadium negotiator. That’s a good question. Didn’t all the parents of the neighborhood lock the stadium in the boiler room and set it on fire? Now it’s back to haunt our dreams — except they’re real!

I’m pretty sure that most of my bandwidth goes to making downloads of gallery available to the wild internets. I have transferred about half a terabyte since September 2004 to May of 2005. Wow. That’s a ton of data (if each byte weighs about 1.65015943 micrograms).

Postscript to PDF on Windows

I had to print a postscript file on windows. Adobe apparently hates people, so they don’t make their acrobat reader just read postscript files (which would make sense, since postscript and pdf are somewhat related).

Instead I had to install ghostscript, add its /lib and /bin directories to the system path, and then add an action to the file associations for postscript files to call ps2pdf with the filename and the filename concatenated with .pdf. Hooray for wasting a half an hour looking for examples on the internet. The key here is that it was not any harder to do this on windows than it would have been on linux, it’s just that everyone who does it on windows ends up writing a shareware GUI wrapper for it. That’s great if that’s your bag, but I just want to right click on it and do pdf. Actually, I might make that the default double click action — it just poots out a pdf, because when am I ever going to be dicking around in ps files?

Ugh. Stop writing shit in LaTEX. Just use html, then you wouldn’t have these problems. Jerks.

It’s been three years since we won the war in Iraq. Hooray!