Written on Wednesday, the 22nd of December, 1999 at 12:00 pm and was filed under: Uncategorized, Nerdity

smbmount works if you do it right. Heh heh.

DBI and mysql have been properly installed. Now I just have to learn how to use them. :)

The server side includes on this page have slowed it down some, but they're just so much fun…

been properly installed. Now I just have to learn
how to use them. :)

The server side includes on this page have slowed it down some, but
they're just so much fun…

Okay, yes, the linux box is running, and the apache web server seems to be running flawlessly, there are a few niggling details that still have yet to be worked out. Although mySQL is running, DBI and DBD have not been installed for perl. What the crap? Is this why we installed linux mandrake? It seems like if a person selects the “everything” option it should install something as vastly useful as DBI and DBD. I realise that not evceryone will be using them, but c'mon, that's why you go through and weed out the things that you don't need.

Oh well, at least sendmail is working, right? Wrong. Instead of installing sendmail or qmail, postfix was installed. Now, postfix might be great mail software, but was doesn't it show up in linuxconf? Instead, linuxconf references sendmail and appears to edit the sendmail files. Why isn't mandrake more intelligent?

Samba at least installed correctly the second time and runs pretty smoothly. However, I can't get smbmount to work. I want to be able to get the files off of my windows box. Ack! How am I supposed to make a smooth transition to linux if my old files are a mile away. Why should I ftp?

All bitching aside, the linux box is pretty sweet, despite running on a Cyrix P150+ circa 1996. The web serving is much faster than on my windows box, where I was running Omnihttpd. The windows box is a Pentium 200 running win98. Ack. At least the linux box hasn't randomly eaten itself. Just when I had the linux box installed for the first time, the windows box decided that it wanted nothing to do with TCP/IP anymore. A whole day of reinstalling later it was all okay again.

I now have two useful computers in my apartment- a true lesson in frugal computing. However, neither one is really doing what I want them to do, but at least it seems like I can make progress with the linux box. Ah, the trials and tribulations of personal computing.

Thank you for your patience and support. 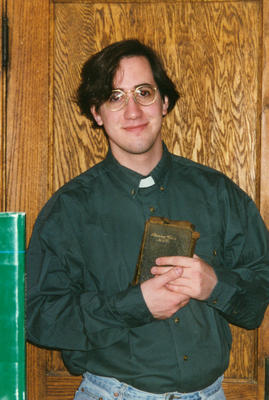 This is to certify that the bearer hereof Reverend Jesse Patrick Mullan has been ordained this Fourth day of November, 1995.

On behalf of Reverend Hensley and the church itself, Jesse Patrick Mullan I select, appoint, and anoint you a legally ordained minister ofthe Universal Life Church. WELCOME to the ministry of the Universal Life Church. YOUR ministerial ordination has been entered into the database of the International Headquarters of the church in Modesto, California. International Headquarters Universal Life Church
601 Third Street
Modesto California 95351
209-527-8111 (voice)
209-527-8116 (fax)
ULC HOME PAGE–ORDINATIONS ONLINE
800-311-2991 ULC 800# for Recorded Ordinations by Telephone
ulc@ulc.org (E-Mail to Brother Daniel for Questions about the ULC)

We believe everyone is already a member of the church and is just not aware of it as yet.

The church encourages (and I ask) that you ordain your friends and relatives on the web site. The ordination of new ministers is the single most important act a new minister can perform to promote the growth and welfare of the church as a body of believers in the right of freedom of religion and to do that which is right.

The Universal Life Church will ordain anyone that asks without question of faith, for life, without a fee. The church has two tenets: the absolute right of freedom of religion and to do that which is right. Anything else, within the law, is allowed. As an ordained minister of the church, you too may ordain new ministers. The Universal Life Church will not stand between you and your God and recognizes that each person must choose his own path. Each person in the ULC is free to follow any path as long as it does not infringe on the rights of others.

YOU are authorized to contact your local media sources and “show them the way” to the church’s WWW site and when there is a story or feature about the church, the Universal Life Church will bestow upon you the Doctor of Divinity Degree. No other church or denomination grants such authority and respect.

Be sure to check out the site later this month. It is being GREATLY enhanced with many of the church’s publications, including THE UNIVERSAL LIFE CHURCH TEXTBOOk, available for viewing and FTP downloading free of any costs.

NEXT month there will be video and audio clips added.

MANY of the degrees, courses of instruction, and even the SAINT CERTIFICATE will be available for viewing.

Keep track of the web site and things will be happening!

Some of you may have heard the news already, but I thought it would bear repeating. Look for interesting birth trivia after the announcement…

Well, the miracle of birth has been performed again. One more miracle like that, and I think Denise (the mother in question) becomes an official saint, although there is an awful lot of paperwork involved in sainthood.

Little Nali ( ber “nali” ce ) lost 6 ounces in her first day of air-breathing. That’s normal procedure for a baby, and it has left the girl a little thinner but still roughly the same size.

Rumour has it that Nali looks similar to “great-grandpa Berube” , and grandma Alice. For those of you who aren’t in the know, here’s a handy chart:

If this handy chart gets screwed up on your screen, tough. I am not going to make it any clearer.

However, to explain my sisters:

Ellen is my older sister, she is 23 or 24 or something like that, and has a daughter named Haley. Haley is (thusly) my niece. Haley is 1 or 2 years old. Probably a year and a half, but I’m a bachelor, I don’t have to remember that.

(My responsibilities as an uncle include: “got yer nose,” playing catch, tossing the child in the air and catching her, piggyback and horsey rides, safe driving when the kids are in the car, occasional babysitting, and some other things that I’m sure will be brought up at one point or another)

Rosa is my penultimate sister. That means that she is next from the last, or the second youngest. Rosa can talk a little. Rosa is one or two weeks older than Haley. Rosa does not live in the yellow house.

Nali is my youngest sister, being a newborn. I fear (or hope, I’m not sure) that she will be my last sister. Her current activities incluse sleeping, opening and closing her eyes, eating, and defecating. Oh yeah, and every once in a while she gets these little smiles on her face. Babies smile when they are pooping.

My niece and younger sisters are unrelentingly cute and I would throw myself in front of a bus to save them. (if it would save them, I mean, it would make more sense to pull them out from in front of said bus than to try to stop the bus by lying under the wheels. However, this is a hypothetical bus, and, as such, it has no concrete mass or weight, so the throwing of my self under the wheels might actually do the trick. Although, that raises a sticky question: if the bus doesn’t exist, does my gesture of throwing myself under the wheels actually mean anything? Oh damn)

Ellen is no slouch in the cute department, either, but she’s already got someone who should do the bus thing for her, so I don’t have to. But I might anyway, if she were visiting up from Iowa, he wasn’t, and the bus situation presented itself.

Anyway, Family is important. I love all three of my sisters, from the shortest to the tallest. That’s what family is about. Oh yeah, another responsibility that I have is that one day I have to escort the kids to the science museum.

As far as news about me goes- well, I’m working steadily and thinking seriously about school again. This whole ennui and angst thing is getting tiresome. I need excitement, adventure, beer parties, sorority chicks- no, wait, I just want to learn something again. (that was really deep, in case you couldn’t tell)

Well, I’ve got to run home and sleep. It’s another big day at the office tomorrow. I’ve got that presentation for the Johnson account- no, wait, I’ll just be pulling cable. Never mind.