I got the negatives back from the first roll of print film to pass through my new camera. I had Target process them and give me an index print, but didn’t get any prints, so I had to fix my desktop and get the slide scanner running again before I could see if the steampunk-style focusing of my new Yashica Auto Focus (circa 1978 or so) actually worked. Indeed, the loud grinding of whirring and grinding of gears did in fact yield reasonable focus, but at 28mm, I’d hope the lens could get there. 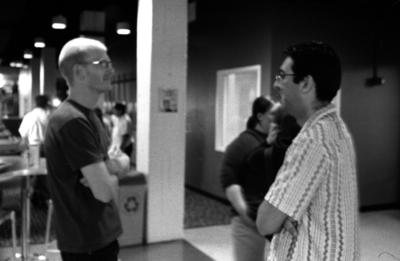 Holy Shit, I Think It Snowed!

Just, in case, you know, you didn’t notice.

One of the things about the photography class that I picked up was the idea that it might be all right to have trees as a subject. I know, I know, it’s hardly the portrait work that people have claimed to like, but, uh, as an exploration of form, and a statement against the tyrannical hegemony of sharply focused images, uh, ahem.

I’ll be over here. 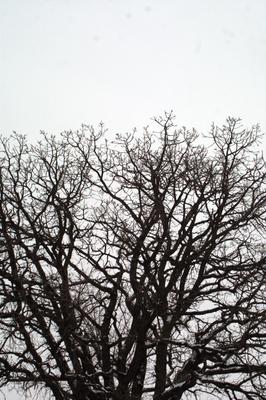 He’s Crafty, He Gets Around

Everyone is doing the crafty thing, you know, with the whole cross stitch/crochet thing, so why shouldn’t I do some, uh, crafty thing, with, like, a mirror, and some “found objects” (loteria cards!).

Or I could just buy one:

I Turn My Camera On

Written on Monday, the 26th of February, 2007 at 2:32 am and was filed under: Diversions, Photography

I seem to have somewhat accidentally purchased an old film camera on the ebay. I blame Sarah for shaking my faith in the goodness of digitalness.

He don’t know why the sun sets

Compilers kicked my ass Sunday, Monday, and Tuesday nights. Wednesday, I watched Lost and wandered around in a daze. Thursday night I was that kind of tired where you’re just too tired to fall asleep, but I specifically did not do anything besides fix my workstation so that I could do my homework for Computer Science 4061: Introduction to Operating Systems — otherwise known as “Beginning C Programming in a POSIX environment.”

I wanted to be shitted, showered, coffeed, and at the computer by noon at the latest, but Lisa wanted the sink fixed before anything, so I didn’t get to it until after a trip to South Minneapolis and McDonald’s. Then, at one (or so), I sat down for about eleven hours to hammer out a shell. I took a break to watch Monk and eat pizza, and I think I stopped for a while for something else, so let’s call it nine hours.

Baby, I been havin a tough night so treat me nice aight?

I scanned two rolls of film and cut vegetables for an upcoming soup. I also attempted to fix the Keathly sink, but Home Depot lacked the right faucet cartridge. I finally replaced the failing hard drive in my workstation, but then also formatted a linux partition on my boot drive that had the grub loader that was… uh… chain loading(?) windows? I dunno. Apparently I can just do fixmbr from the WinXP install disc, but, uh, wow, that even puts ME to sleep.

Team Kickass reunites for Zach’s party. Zach is wearing the robe and wizard’s hat, Paul is wearing the white hat, and I am wearing no hat. Everyone is laughing because Paul is telling a story about someone pooping. 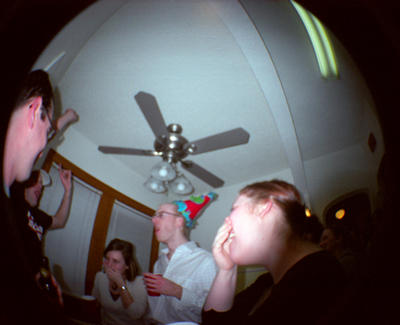 There was a surprise birthday party for Zach on Friday. Booze attended. I almost peed on Sarah’s dresser in the middle of the night.

“You’re not in the bathroom!”

Here’s One I Made Earlier

Dear Beatboxing that gives me uncomfortable and inappropriate erections while I am at work,
I think that you know where this letter is going, so I will leave the conclusion up to you.