First I want to give my utmost thanks to Ann from HelpingU for taking quick and decisive action with regards to my SELF loans. Not having that problem hanging over my head meant that I could spend the last three weeks of classes only stressing about homework and finals. However, a new semester is upon us, and with new semesters come new problems, or at least new combinations of old problems.

Two weeks ago I moved Cake Woman into our new apartment. Lisa and my mom helped clean and pack, and eventually Cake Woman helped me load a few boxes. I think that I moved four loads with the pickup and the wagon by myself, but every time I tell the story I add another load to the list. I’m up to about 600 loads now.

Postscript to PDF on Windows

I had to print a postscript file on windows. Adobe apparently hates people, so they don’t make their acrobat reader just read postscript files (which would make sense, since postscript and pdf are somewhat related).

Instead I had to install ghostscript, add its /lib and /bin directories to the system path, and then add an action to the file associations for postscript files to call ps2pdf with the filename and the filename concatenated with .pdf. Hooray for wasting a half an hour looking for examples on the internet. The key here is that it was not any harder to do this on windows than it would have been on linux, it’s just that everyone who does it on windows ends up writing a shareware GUI wrapper for it. That’s great if that’s your bag, but I just want to right click on it and do pdf. Actually, I might make that the default double click action — it just poots out a pdf, because when am I ever going to be dicking around in ps files?

Ugh. Stop writing shit in LaTEX. Just use html, then you wouldn’t have these problems. Jerks.

It’s been three years since we won the war in Iraq. Hooray! 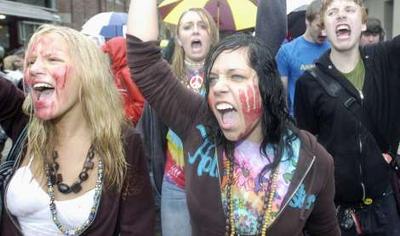 Photos from the Minnesota Daily. Used without permission.

I heard a rumor today that Radio K is going to ruin change their logo. Nonetheless, I still found it in my heart to buy a couple of watts (because I try not to be a complete leech all the time). At first I was planning on calling from the All Request Hour headquarters in the Whole down in the basement of Coffman because Zach and I have made a habit of going down and harrassing the staff. However, they were jerks who wouldn’t play my requests out of time, so whatever.

The other day we had an employee banquet at work, where we feasted upon the flesh of junior employees.

So I’m watching Mythbusters and I see the ad for the “Meat Missile” episode. Of course I had to share that news with Zach, who had some new of his own.