I threw my chain three times today. Two of those times were during my inaugural night run home, at ten, after my art class on the west bank. If you know of good cheap food on the west bank, or would just like to eat with me on Wednesdays between five and six or after ten, you should let me know.

The second time the chain jumped I got off to fix stuff and spent some time staring at the lighting and thinking about where I could put a reflector on the back to supplement the flashing red LED. A dude pulled up and asked if I needed help. When I said no, he made a u-turn and drove away. Wait, what? A u-turn? Weird. Anyway, I’ll be looking into a reflector for my rack. Heh heh, I said rack.

Oh yeah, I’m holding 200#, even with the Chipotle burrito that I had today. I predict that I will have my first sub 200# weigh in this week, unless I eat a small child, which might happen. I’m super hungry right now. Unfortunately, if I eat Noah I will never be able to use him to pick up chicks.

No! I will never do that!

I bet he’d be a big hit at the Entry. He likes music. Hmm…

Do I Have Plans This Saturday? 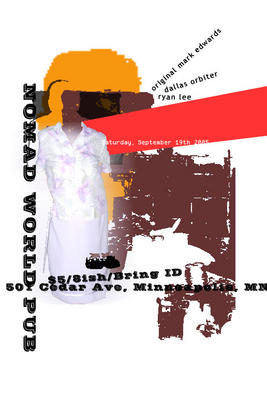 P.S.: Time to eat and vote, possibly simultaneously, since time may be running out.

The bike to school/work was a lot better today, what with the cool weather and all. On the other hand, I am not really looking forward to riding home in the rain. Jeremy said that he would probably be willing to trade cranks straight across, and I think that in another month or so I will be very interested in such a thing. Even today I was going flat out on the downhill of Johnson and keeping a car at bay. In another month I will probably have outgrown my top gear and I’ll be ready for the 39/53 action. Hooray!

Maybe not. Like I told Jeremy, I want to ride more to make sure that what I think that I want is what I want for real.

Love in the Dakota

You might ask me “hey, Jesse, how did it go last night? Did you hook up?”

The answer to that would be a sad “no.”

Fat Kid Wednesday plus a happy hour that starts at eleven. Lisa and Cake Woman will be flying wing for me. If only there were a way for me to have even more women celebrating my virtues in public. Hmm.

P.S.: Dead Like Me is awesome. It shares a handful of directors and producers with Wonderwalls, if that gives you any idea. If it doesn’t, then that’s two tv shows you could sample via Netflix.

Today it was me who forgot the key to the garage — I left it clipped to my pants while I sailed to work. While I parked my bike, a cute woman pulled up nearby on her bike and smiled at me. I smiled and futzed with my lock a bit, then looked up and smiled again. At that point she looked at me funny, then said “sorry, I thought that you were someone else” and booked out of there. For the love of Pete, just bike away, leaving a smile behind for those of us who don’t get a lot of random smiles! After that I climbed into the bell tower and rang my bells for several hours while sobbing uncontrollably.

If I weren’t so terribly ugly, I’d smile at random people just to make them feel better about life and themselves.

Oh yeah, I almost got hit by a car on the way home because I was feeling all cocky and blew through a stop sign. Oops, I’m a dumbass.

Eventually I hope to truly conquer the Johnson street hill — ride up it in a surge of power and stamina. Right now I ride up in the granniest of my gears and feel like I’m going to die every fifteen feet. Awesome! I haven’t been this drenched in sweat since I walked home that one day. ¡Que feo!

Dallas Orbiter at the Terminal, Gay Beast at the Entry, Funk at the Fred, or something else entirely? You make the call!

Written on Thursday, the 8th of September, 2005 at 3:21 pm and was filed under: Diversions

Soooooo… I woke up bright and early today and got ready to ride my bike in the first nice weather we’ve had in months, except that the keys to the garage were not hanging up in the kitchen. A half an hour of frantic searching later (those were the back up keys since the originals were lost) and I had missed the last on time bus. No problem, I have a third fall back with four wheels. I hopped into my car and lo and be fucking hold the day lots were full! Now I’m really cutting it close as I park by 15th and Como and hop the 3 bus to campus and practically run to class. The whole time I’m imagining breaking down the door to the garage with the sledgehammer that is in the garage.

Lisa found the keys in a drawer in the bathroom. This is the same reason that I buy multi-packs of screwdrivers twice a year so I can find a phillips head screwdriver when I need one.

You might find it hard to watch this all. That’s a man of the cloth holding on to her.

Thanks to Boing Boing.

Won’t you take me away
And take away me

I rode the bus instead of my bike today because it was raining while I was getting ready, and Lisa said that it would likely rain more. I forgot my “leave an hour early to get there on time” rule, so of course I was late. Hooray for me! I totally should have done this last year - it’s just a 4 to the 2, and the stops are within a block of each other.