Sorry, no pictures today — I’ve been shooting HP5 in my new Canon Canonet QL17 G-III, which means that I am at the tender mercies of Sarah to either develop my film for me or sneak me into a lab to process my film myself.

I signed up for an apartment down on the edge of Steven’s Square. I hope that the building is haunted.

“That doesn’t mean that I don’t believe in polygamous marriages,” I replied.

“No, but it does reduce the likelihood.”

I tell you what: I have no problem with the idea of a military. I’m fairly sure that we have a real need for a standing army, navy, marine corps, and unstoppable air power. That said, at 31, I think that I have spent plenty of time considering the possibilities of service, and so far the answer has been a simple “not for me.” Ain’t no thing: I like sleeping in and not being shot at. That’s just me.

I got an email from the Marines the other day, so I thought that I would share. We’ll see if they email back.

I Wanna Take You On A Moustache Ride

First of all, Saul of the Molemen is the worst television show about a geologist ever. Second, I can’t stop watching it. SO BAD.

My mom and I went to look at an apartment Saturday morning. Afterwards, we drowned my disappointment at the Mill City Cafe in Northeast. I took a roundabout way there, and on the way, my mom spotted a red robot in a window.

“Look! There’s a robot in the window of that antique shop!” she said. I glanced over and declared that my hunger was too great — we would have to visit after breakfast.

Little did I know that there was a cute, black rangefinder camera there. 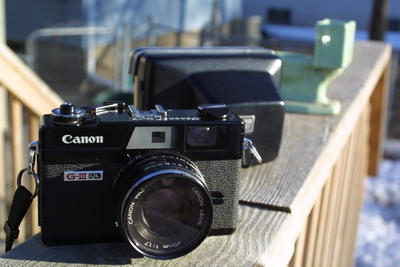 We’re Only Making Plans For Nigel

A real public service announcement. Not safe for work, unless you work in a nut doctor’s office.
http://www.noticeyournuts.com/

There is no such thing as a one sixth note

I keep listening to various performances of the Super Mario Brothers theme music, and I keep hearing some weirdness. I decided to pull out a tracker and get the timing down right. I was sort of right about the internet notation being wrong. The time signature is 4:4 with a nice triplet in there. To notate it in step notation I had to use a 96 line block, with each beat encompassing 6 lines.

Today I looked at three apartments, called a couple more, and picked up a CD from La Cible*.